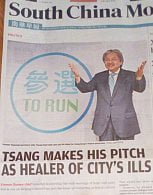 After being forced to wait while Beijing ensures Carrie Lam gets all the attention, former Financial Secretary John Tsang declares his wish to be Hong Kong’s next Chief Executive. His supporters have made use of the time to package him as modest, accessible and blessed with a common touch – in contrast to the arrogant and elitist image of his rival. For example, he has a trendy, content-lite website, while Carrie doesn’t dare have a Facebook page.

He delivered his announcement in a suitably sort-of-endearing, slightly bumbling, self-conscious, unpolished manner. He dutifully bowed to Beijing by claiming pro-Chinese patriotic activity while a student in the US, and denouncing Hong Kong’s pro-independence sentiment. But he also obliquely acknowledged the sad situation in the city today – the sad situation caused by the Chinese Communist Party’s malevolence – by voicing his distress at young people talking about leaving. As an attempt to differentiate himself from Carrie and appeal to the young and educated, it’s reasonably slick.

His ‘twin peaks’ logo is (by Hong Kong CE ‘election’ standards) hilariously witty – a visual pun on his trademark moustache. It is also supposed to remind you of Lion Rock, emblem of Hong Kong’s resilience and optimism in the glory days of the 70s and 80s, and of course stylishly adopted a couple of years ago by the Umbrella pro-democracy movement. An outline of the feline-shaped hilltop would have been too obvious, but you get the message.

Getting deeper into subliminal symbolism here, the logo also brings to mind the Lingnan badge. ‘Lingnan’ is an old name for the Guangdong/Guanxi area and is associated with Guangzhou educational institutions going back to the 19th Century. It also refers to a Cantonese school of painting from the early-mid 20th Century. Just in case you were wondering where the localist/regionalist vibes were coming from.

I could go on about the resemblance to Barak Obama’s logo, and the similarities between John’s ‘Trust, Unity, Hope’ slogan and ‘Yes We Can’, but we are getting sidetracked.

John’s supporters, gathered on stage with him at his press meeting yesterday, look like a bunch of civil-service dweebs, as befit a well-intentioned and ineffective bureaucrat. Behind the scenes, however, are the local property and other tycoons who backed Henry Tang in 2012 and detest CY Leung. It comes to something when the parasites who have blighted our economy and lives for decades apparently see common cause with young radicals against the threat of Beijing’s Leninist oppression.

Beijing, needless to say, will have none of it. Barring a direct meteorite hit, Carrie is the chosen one.

The only uncertainty is how the United Front puppet-masters play it. Common sense says they should arrange for the unpopular Regina Ip to be the designated loser on the ballot. John, by contrast, would probably outperform Carrie in public opinion polls. Perhaps they have ways of making sure he doesn’t – they have dirt on everyone. Or perhaps scorning public opinion would be the point. Because they can. That’s the Communist Party’s motto: ‘Yes We Can (you have no say in the matter)’.

Which bring us rather elegantly to something else…

‘Because they can’ is the answer to a joke question about (male) dogs. And I declare the weekend open with the sad news, which has only just reached us, of the death of Francis, co-host of the magnificent YouTube show Cooking With Dog, as seen here, here and here, complete with the world’s creepiest-ever English voice-over.