There comes a stage where the inane complexity of something outweighs the weirdness, and you have to cast it aside. You sacrifice the thrill of the bizarreness but save your sanity. The US election, with the FBI dropping some sort of bombshell over the incomprehensible tedium that is Hillary Clinton’s emails, has reached that point. South Korean President Park’s ‘Rasputin-like’ shaman-crony and her Eight Fairies, while on the face of it more entertaining, is also in danger of becoming too mind-numbing to be worth following. (By Korean standards of murk it’s pretty so-so, and Burma’s Ne Win had far more interesting mystics, astrologers and numerologists fine-tuning policy.)

So it is something of a relief to turn the page and see a plain and simple Hong Kong politics column by Tammy Tam, Party Secretary at the South China Morning Post. It is interesting not for any facts or opinion, but for the way it accommodates two contradictory ideas: the notion that there is a competitive race among contenders wishing to be the next Hong Kong Chief Executive, and the fact that the Chinese government decides in advance who will take the job. The writer seems to try reconciling the two by implying that Beijing masterminds the nomination part of the process, and then mysteriously fades from the scene so participants ‘run’ in an ‘election’. 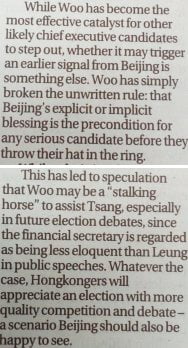 By declaring himself a candidate apparently without Beijing’s approval, retired judge Woo Kwok-hing has supposedly disrupted the process, unless maybe he is a ‘stalking horse’ for yet-to-declare John Tsang, who isn’t too hot at public speaking. This supposes either that Woo is serious and thus a rogue intruder beyond anyone’s control, or he is part of a planned drama to help someone who we all know will only ‘win’ if Beijing decides in advance that he will.

This isn’t quite as nonsensical as it seems, because there are two extra dimensions to a Hong Kong Chief Executive quasi-election.

The first is the Chinese Communist regime’s curious obsession with making the charade look like an actual election (albeit with only 1,200 voters on the Election Committee). This is annoying because, although no-one believes that ceremonial votes in Mainland political bodies are real, the local and overseas media swallow the fiction that Hong Kong has some sort of authentic poll. Watch out in the months ahead for apparently intelligent correspondents (the BBC, CNN, FT, NYT, etc) reporting about people ‘running’ for an ‘election’ with no hint of the reality, namely ‘rubber stamp’.

The second dimension is the potential role played by local public opinion. Since the semi-uprising of 2003, everyone has assumed that Beijing will scratch someone off the shortlist if the Hong Kong people detest him or her deeply enough. It would be perverse, even by Communist standards, for Beijing to give one person the job when another contender on the ballot had scored much higher in opinion polls. So we can assume that if nice guy John Tsang declares himself a candidate it means CY Leung is finished. Conversely, if Beijing thinks Hong Kong needs more punishment, John Tsang won’t ‘run’.

(Some think that Beijing might put two acceptable names on the ballot to enable some sort of test to help Beijing choose a winner. Even this seems far too unmanageable for the control-obsessed Xi Jinping.)

Where does ex-Justice Woo come into all this? Not everything is stage-managed; part of the fantasy is that anyone may run for CE subject to basic requirements including mental incapacity, or (ha ha) lack of. Woo is taking advantage of the ‘election’ process to say what we might call a silent majority in the establishment probably think. No businessman, no bureaucrat, no loyalist politician can openly disagree with Beijing. But Woo has no Mainland investments or public career at risk, so he can attack CY and call out the Liaison Office, even express dismay about June 4 and acknowledge the Umbrella Movement. He does so in a lawyerly, understated way and does not, for example, dispute Hong Kong’s national security obligations under Article 23.

He is not an activist, pro-dem or radical academic. He is not part of the opposition. That’s the point – he is part of the establishment, saying what the rest of them can’t as we slide towards the totally rigged ‘election’. He and any (discreet and probably obscure) backers assume that Beijing will listen. To which we can only say: hmm.

5 Responses to A sort-of stalking horse