This month’s official outburst of orchestrated, obsessive, overblown mouth-frothing concerns the newly elected Legislative Council members who failed the swearing-in kowtow test. Their immature antics, which upset the highly sensitive Ronny, are vulgarity induced by self-hatred and opposed by 99.9% of teachers for hurting the feelings of all Chinese people. (Logically, 99.9% of teachers would agree, it follows that anyone whose feelings were not hurt is not Chinese.) 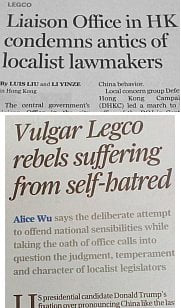 It falls to Global Times to consider that those responsible for the ‘floor show/ridiculous farce/profanity’ have support, and the city is increasingly complicated. ‘Complicated’ (also known as ‘contradictions’) is Communist-speak for ‘maybe we are partly responsible for screwing things up here’.

This is a battle of wits. The Hong Kong government, under Liaison Office direction, is potentially walking into a trap by fixating on punishing a handful of young democratically elected representatives for not conforming to the ceremonial symbolism. The radicals also risk falling into a trap, if they give officials evidence to convince the public that they are mere troublemakers, money-wasters, sympathetic to Japanese militarism or – heaven forbid – getting boring.

But the battle is between a lumbering and predictable, simple-minded elephant and some agile, bright and funny gnats. When Sixtus Leung and Yau Wai-ching get their second chance to take their oaths correctly on Wednesday, they could do worse than recite the wording 100% accurately, in finest Mandarin, preferably wearing little Mao badges and carrying mysterious red-bound books – with, of course, totally straight faces.

9 Responses to Choreographed rant of the month targets oath-takers