Yesterday it was lawmaker and pro-Beijing veteran Tsang Yok-sing – today it’s hereditary tycoon and ex-Chief Secretary Henry Tang proclaiming that the Chinese government does not pick Hong Kong’s Chief Executive. “I always believe the CE election is fair and open,” he says. (The ‘always’ there is a nice touch.)

In the background: the sound of the most intensely gritted teeth ever.

Henry knows extremely well just how efficiently Beijing decides the result of Hong Kong’s CE ‘election’ in advance – even reserving the right to change its mind at the last minute.

He was the pre-determined ‘winner’ during the run-up to the 2012 selection ceremony by a 1,200-strong committee. Most of the city’s tycoons had publicly announced their support for him. Then, his extramarital affairs and illegal basement mysteriously-but-professionally came to light. With just days to go, the main United Front groups on the Election Committee were maintaining that they had yet to make up their mind how to cast their ballots, and some of the grubbier and dimmer members openly whined that they weren’t sure who they were supposed to vote for. The word finally came down, and CY Leung emerged with his famous 689 votes.

Although the Election Committee is carefully packed with enough obedient loyalists to ensure a majority, it is unlikely that the Chinese Communist Party leaves anything to chance. You do not have to be a huge cynic to presume that the ballots are numbered in such a way that votes can be traced – or that the whole vote-count can be falsified.

As is customary among those assured of the job, Henry didn’t bother putting together a serious manifesto. Most politicians in Hong Kong are essentially role-playing and have few ideas about policy. It’s quite a shock when you actually see a fairly comprehensive platform.

Still (understandably) miffed about being refused a TV broadcasting licence, businessman Ricky Wong plans to run in September’s Legislative Council elections on an ‘Anyone but CY’ ticket. He has a real, and quite interesting, platform…

Leaving aside the gimmicky electronic referendum thing, there’s something here to annoy everyone. ‘Pocketing’ a quasi-democratic electoral reform is unacceptable to any serious pro-democrat. Flexibility on this is what makes the ‘third way’ semi-dems people such hopeless losers. But Ricky is just getting started.

His support for a third runway and development in country parks and opposition to rent control and working-hours laws are all standard pro-business positions, but unpopular among environmentalists and pro-labour/grassroots groups. Opposition to independence and support for a national security law are obvious pro-Beijing positions, bound to anger localists and civil-rights activists respectively.

Proposing an end to the New Territories ‘small house’ policy is common sense but unacceptable to officials petrified of upsetting the Beijing-friendly rural mafia. Legalizing

Letting schools stick with Cantonese and limiting new immigrants’ access to welfare and public housing will appeal to localists and upset Motherland- and integration-adoring patriots.

Election freaks are having a field day working out whether Wong will take more votes from Regina Ip or the pro-dems on Hong Kong Island (he’s looking for signatures, if you’re interested).

Since it cuts through the normal pro-Beijing-pro-dem divide, this policy platform might seem all over the place. But it is in many ways quite coherent: it bows to the reality of Chinese sovereignty, it supports business, and it puts Hong Kong people before parasitical interest groups and outsiders. It’s what the Liberal Party – or something like it – would propose if Hong Kong had a democratic political system (Ricky was associated with the Liberals way back). His opponents’ ideas, by contrast, will be piecemeal and, mostly, insipid. A pattern that Henry Tang might recall.

I declare the weekend open with a puzzle: how do Hong Kong government information officials promote ‘peace of mind in times of typhoons’ with a visual of hands forming a roof over an open book? 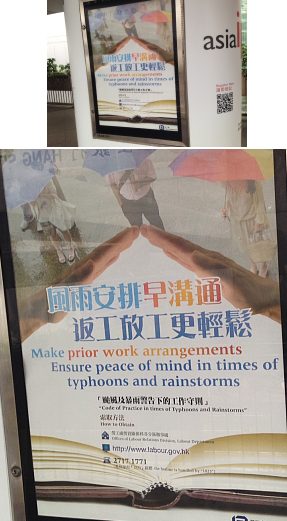 Don’t go into the office, make sure your books don’t get wet.