China in major U-turn, or L-turn, or something 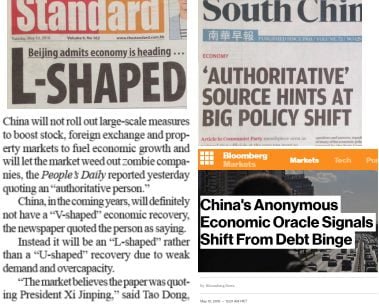 Both the South China Morning Post and the Standard understandably and rightly give front-page treatment to what is probably the biggest economic story of the year: the Chinese government has seen the error of its ways and will abandon its debt-binge stimulus policy, let zombie companies die, allow real-estate and commodities markets to serve their proper functions and – implicitly, at least – embark on real productivity-boosting reforms.

However, there’s a snag. The source is People’s Daily, which carries a prominent Q&A on the economy from an anonymous ‘authoritative’ figure in the leading space usually reserved for fawning coverage of Xi Jinping.

As Bloomberg points out, this is Mr Anonymous Economic Oracle’s third People’s Daily interview. The first was a year ago; he said the government was in full control and everything was fine – and weeks later the stock market collapsed. The second, last January, mentioned an ‘L-shape recovery’ (euphemism for ‘stagnation’) and urged ‘Supply-side reform’ (a euphemism for something, but it’s not clear what). The stock market crashed after that one, too.

Because these things appear on the front of the Chinese Communist Party’s official organ, everyone assumes they must have the approval of the senior leadership. But because they are anonymous, inconsistent in terms of content and opaque in meaning, and eerily presage stock market collapses, they simply increase uncertainty about what is happening behind the scenes on Planet Beijing. (George Magnus quoted by Bloomberg: ‘bizarre’.)

Rather than reassure us, the People’s Daily Q&A raises the possibility that things are worse than we thought. It could mean China’s leaders are on top of the situation. But it could also mean there is a major conflict going on about whether and how to change course – or it could mean the leadership is too petrified to wean the economy off the Great Ball of Money, and is resorting to propaganda-lies to keep face and buy time. We don’t know.

(It’s like the recent concert of Cultural Revolution-style Red Songs. It was held in the Great Hall of the People under the auspices of the Ministry of Culture, yet apparently was not authorized by anyone. Something’s going on, but no-one has a clue what.)

Apologists claim that, compared with clunky and ineffective democracies, the totalitarian CCP system enables the leadership to exercise full decisiveness and competence. But it could just as easily mask a bunch of panicky bumblers making it up as they go along. The real problem is that we have no way of knowing which it is.

5 Responses to China in major U-turn, or L-turn, or something