Obsequious pro-Beijing politicians line up to declare that anyone voicing an opinion that Hong Kong should be independent is committing a crime. (While the shoe-shiners go through their ritual, plodding and predictable reactions to events, the localist activists are running rings round them with wit and verve – actually trying to get the courts to rule on the all-but-forgotten sedition laws.)

Meanwhile, the city’s financial markets regulators are giving the world the impression that they are following their Chinese counterparts’ example and penalizing analysts who have the temerity to publicly doubt the perfection of Mainland companies’ performance and governance. Moody’s is appealing to the courts on this.

And the Privacy Commissioner joins in by apparently trying to prevent journalists from accessing personal details in the Companies Registry. The Privacy Commission has a history of trying to impose weird restrictions on how the public can use public information, so this might be just another of these deranged policies. But this comes just weeks after the Panama Papers revelations about Mainland elites’ wealth-stashing and residence-holding in Hong Kong, which naturally makes you wonder.

However… The Big Almighty Mouth-Froth Hoo-hah Scandal Outrage of the week is a one-minute video of a kindergarten class.

community was up in arms and horrified by what it showed. So I watched the scene of teachers and kiddies. I waited for a wild ravenous beast – preferably some sort of bear – to burst in and devour one of the little children. But it didn’t happen. I waited for the Made-in-China ceiling to collapse and crush everyone. But no. I waited – on the edge of my seat – for a teacher to announce a surprise six-hour exam on calculus, with instant expulsion for any four-year-old who failed. It was not to be.

What was I supposed to be freaking out about? Perhaps the background noise – the kindergarten sounded like it was between a couple of expressways. Or maybe the financial waste involved in having so many teachers and other staff for so few kids. Especially as the staff came across (so far as you can tell from a brief grainy video) as a bit sullen, slovenly, bored, exhausted, or all of the above. Apparently, I was getting warmer. After the Chief Executive’s Daughter-at-Airport Uproar, Hong Kong finds itself with a new Bag-Gate.

I declare the weekend open with what may be a terrible omen. Doing a spatially limited but thorough bit of spring-cleaning in my office, what do I find under layers of dusty papers but this… 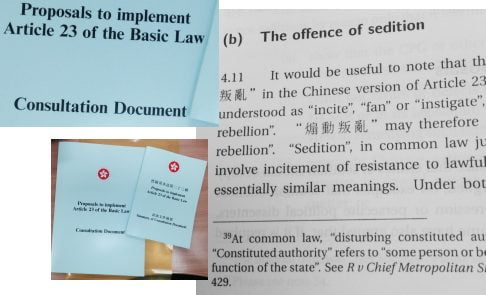 Published by the Security Bureau, September 2002. Must be worth a few million on eBay now.