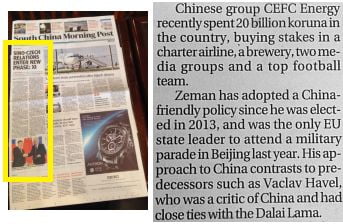 Phew! Relieved! Like most of us, I have spent months lying awake at night worrying about relations between China’s Central People’s Government and the enigmatic and unpredictable leadership of the plucky little Czech Republic. What a joy it is to see the South China Morning Post devoting well over a foot of its front page to Xi Jinping’s assurance that ties between Beijing and Prague are entering a new era of co-operation and partnership and win-win Belt-and-Road mutual gobble-gobble gimme-gimme.

In fact, the SCMP reports, the gobble-gobble has already begun, with oil company CEFC Energy having recently paid 20 billion koruna for stakes in an eclectic range of Czech companies (koruna is a type of beer used as currency in remote regions of Eastern Europe). They include a charter airline, a brewery, a couple of lucky media groups and the inevitable top football team. Wikipedia suggests the Mainland conglomerate has, with dazzling originality, also invested in real estate. And it has bought into a Czech travel firm ‘probably with a view to capitalizing on the rapidly increasing numbers of Chinese tourists visiting Prague’.

Some of the above booze/tourism/property imagery may subliminally prompt thoughts of Lan Kwai Fong. And what do we find but that Xi’s host, the Czech President, is a groveling shoe-shiner called Zeman. If that makes you shudder, I apologize – I am simply passing the fact on.

More on this to come…