Young protestors in Hong Kong get a bit wild and drop the dreaded word ‘independence’ into their slogans. Result: the Chinese government takes action within weeks – curbing unlimited cross-border trips by Mainlanders despite infuriating Shenzhen authorities and public opinion.

(Chief Executive CY Leung claims that the decision was a year in the works and was delayed by the anti-smuggler protests. This is a perfect example of the difference between the Goebbels-style ‘Big Lie’ – an untruth so blatant and huge it might actually be believed 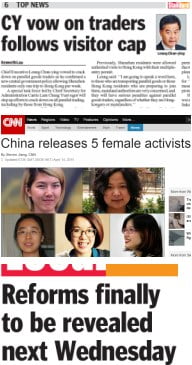 – and the children’s desperate last-resort ‘Vast Fib’, which is so ridiculous that it is sad and invokes pity.)

Meanwhile, nearly the whole world – from activists in Causeway Bay to US leaders – calls for Chinese authorities to release five feminists who had the temerity to protest harassment. Result: released they are. There are probably several reasons for this climb-down, but the overseas reaction to this totalitarian ‘kill a chicken to scare the monkeys’ lameness clearly played a part.

So we come to Beijing’s latest concession: a sort-of less-restrictive-than-expected pre-nomination or ‘primary’ process for candidates hoping to run for Chief Executive in 2017, under the political reform proposals to be published next week. The idea is to add a bit of badly needed credibility to the nomination process.

Under the hardline framework announced by Beijing last August, the two or three candidates on the ballot must each be endorsed by over 50% of the 1,200-strong Nominating Committee. This is the same body with an inbuilt Beijing-controlled majority that ‘elects’ the Chief Executive under the current system. This blatant rigging of the choice of candidates goes beyond negative vetting that excludes specific undesirables into a positive clearance system that includes only specific acceptable individuals. So Beijing chooses (say) CY, Regina Ip and Antony Leung – then you pick one. If any one feature of the proposed package tipped the balance, spurred the Occupy protests and ensured pan-dem opposition, it was this.

It is hard to believe that Xi Jinping is all that fussed about whether or not Hong Kong gets this quasi-democratic system, a plan he inherited from his namby-pamby predecessors. Even a mock version of universal suffrage would raise questions in the Mainland about why Hong Kong gets special treatment. But someone has obviously decided to at least put on an appearance of effort in getting the package through (and continuing with the status quo is probably not that appealing either).

So the big deal is: anyone who gets 120 endorsements from the Nominating Committee will be shortlisted for the second round, in which the Communist Party picks its two or three ‘acceptables’ for the ballot. To discourage the inevitable herding instinct of patriotic shoe-shiners to anticipate and endorse Beijing’s ‘favourite’, there will be a cap of 240 endorsements per nominee. Bottom line: the numbers – 120 and 240 – are a bit lower than some expected (in case you’re wondering what the ‘big deal’ is).

Does this make a difference or not? It hasn’t impressed any pan-dem lawmakers, who seem as determined as before to veto the package. (A few renegades like the Civic Party’s Ronnie Tong and the Dems’ Nelson Wong seem to be doing a moderate-wavering-dissident-posturing thing, but presumably to no effect. Wake me when it’s over.)

From officials’ point of view, this sort-of concession should boost support for the package because, in theory, it could enhance the informal but really really real role of public opinion. The pro-dems, should they muster a modicum of unity, could easily wield 120 Nominating Committee votes in the primary stage and thus get a candidate onto the list from which the Beijing-controlled majority then selects the candidates for the ballot. If public opinion polls show massive popular support for one or two people on the primary list, Beijing would find it hard to reject them, as it would undermine the integrity of the subsequent candidates and general election.

That’s the theory: the Chinese Communist Party would find it hard to say ‘screw you’. It’s debatable. But it is undeniable that a publicly recognized, charismatic, capable, highly popular non-establishment candidate could get 150 endorsements and could complicate things (for example, force establishment rivals into embracing more populist policies). Beijing is to some degree gambling on the inability of the pan-dems to put forward a credible potential leader capable of outclassing Regina or Antony. And, sadly, we have to wonder just how much of a gamble that is.