What if no LKY? Time to find out

After lunch at Mui Wo’s Bahce Turkish restaurant yesterday, a hike over the hills. You normally expect to encounter a few people in twos and threes up there, but I ran into some walkers who had apparently decided to enjoy a quiet day in the country as a group of 30.

When I arrived in Discovery Bay, I found the famously expatriate settlement in a state of shock and outrage. The previous evening, excited residents reported, a group of kids had run into the community’s drinking/commercial/transport hub and raised the alarm about a security guard having beaten a young child. Details were hazy. The kid was 7 or 12; the guard worked for the shopping centre not the main security force; the kid had a reddened face or bruised ribs; the guard had run away with kids and/or parents in pursuit. What was certain was that passers-by had taken photos, the cops had arrested the alleged assailant and – most of all – this was a grievous outrage.

No-one I heard mentioned the death penalty as such. But the mood was that if furious protective parents had caught the guard they would have lynched him, and he would have deserved it. One resident repeatedly and angrily stressed that everyone had to demand action and answers to make sure the affair didn’t get buried.

Common sense and the law tell us that a security guard (or anyone) should only whack someone else in self-defence. Observation, hearsay and plaintive appeals for good behaviour in public notices from property management also suggest that at least a few kids 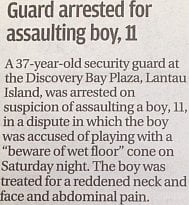 in Disco Bay may be bratty and spoilt. I wouldn’t want to pass judgement. (A little South China Morning Post item today puts the excitement into perspective.)

However, I would venture to guess that the kid in question and all or most of his buddies were white/Western, English-speaking and well-off, while the security guard was Chinese or South Asian and relatively poor. And that the residents’ rage reflects deeper sensitivities and fears within what is essentially a middle-class, racially/culturally exclusive gated community. Under siege by the mysterious teeming Oriental hordes just a short ferry-ride away across the water, etc. (Maybe the 30 hikers were fleeing in fear of pogroms.)

Which brings us rather neatly to the death of Lee Kuan Yew. The father-figure of modern Singapore built his sterile but prosperous city-state on paternalism and authoritarianism rooted in a fear of the inferior peoples surrounding the place. Only his leadership and genius kept the tranquil and air-conditioned island safe from the surrounding steaming jungles full of resentful, impoverished Malay Muslims, pirates and cannibals.

Lee’s drawn-out passing allowed obituary writers to polish and update the epics that have no doubt been on file for years. Philip Bowring’s is probably second-to-none. Among his good points: Singapore’s prosperity came naturally via geography and history rather than through Lee’s guidance (Hong Kong did equally well without state control), and the vindictive and spiteful treatment of critics was unjustified in terms of enabling stability or development (as Hong Kong also proved).

Which is more accurate or fashionable or edgy or provocative? To go with the ‘Lee Kuan Yew as towering genius’ school of thought, or to recall the man as vicious and even shallow – or whatever word we use for late-20th Century eugenicists?

Either way, the real question is for his surviving leaders and citizens in Singapore: what now? Many years ago, I remember a Hong Kong colleague’s sadness and anger at the fact that what was then a British colony was the freest Chinese community in the world, with ex-colony Singapore coming next, Taiwan’s police state coming third and the Communist Mainland last. Since then, Taiwan has gone democratic and leaped to first place, and Hong Kong is being brought closer under Beijing’s paranoid one-party control. If the Chinese government continues to suppress Hong Kong’s media and judiciary, Singapore will get the number-two spot by default. As it is, Singapore is already making timid moves to ease up.

Rather than ponder, like a book I have or one Twitter account, what things would be like without Lee Kuan Yew, Singaporeans should ask what is now possible without him. Just as Hong Kong would if the CCP breathed its last.

9 Responses to What if no LKY? Time to find out