Hong Kong none the wiser after mention by Beijing leaders

We declare the weekend open with much hand-wringing and anguish over the possible precise meaning of this year’s Hong Kong-related ceremonial chanting at the ‘two meetings’ in Beijing. Last year, Chinese Premier Li Keqiang’s recitations did not include the

catchphrases ‘Hong Kong people running/administering Hong Kong’ or ‘high degree of autonomy’, but this year they did. Or the other way round. Does this mean something profound, and if so what could it be? No-one is sure, though we can perhaps consider the possibility that the grander the hall, the more numerous the red flags, the gaudier the flowers, the larger the number of snoozing delegates, and the more page-one newspaper space occupied – the more vacuous the statement.

The big Hong Kong-related announcement this year is that ‘One Country Two Systems’ must strictly comply with the national constitution. Does this mean that in the past the 1C2S principle needed only to loosely comply with the constitution, or could flagrantly violate it? We’re unable to say. To confuse matters, some reports suggest that 1C2S has to ‘unwaveringly’, or perhaps even ‘steadfastly’ comply with the founding document. And to remove any remaining possibility of clarity, the constitution itself is anyway unknowable, as under China’s rule-of-man system, the wording of laws is irrelevant, and their meaning decided by the Imperial or Communist overlords from day to day depending on their mood. We have no clue what it is that 1C2S must comply with – unwaveringly or steadfastly.

Enter Lau Siu-kai, to add a weasel-like dash of the surreal as we mull over the terminology of slogans that have no clear meaning. Lau Siu-kai – a litany of misery and wretchedness: a CPPCC delegate, a professor of sociology (eewww), and the former Central Policy Unit head whose forecast turnout for the July 1 march in 2003 was about one thirtieth of the eventual half-million-plus. He is also one of Hong Kong’s most reliable and mechanical apologists for the Communist Party, taking loyalty to extremes above and beyond the call of shoe-shining, to the point where it becomes clear something very dark and horrifying must have happened to him as a child.

So along comes Professor Lau to tell us that Beijing and Hong Kong should work to ensure a more active role for the latter in China’s 13th Five-Year Plan, and that this would help ease cross-border tensions and discourage separatist ideas in Hong Kong. Let’s look at this backwards. Are separatist ideas (which are in fact fantasies mischievously peddled to provoke the likes of Lau into mouth-frothing) caused by cross-border tensions (aka locust-kids doing pee-pee in the street)? Yes – we have a clear linkage here. Does a ‘more active role’ for Hong Kong in the redundant Stalinist ritual called a Five-Year Plan actually mean anything? No – it’s another fantasy, in this case peddled to make Hong Kong feel it is normal and necessary to partake in alien and brainless Communist-Mainland stuff. Would such a contrived ‘more-active’ role in this inert and meaningless bit of theatre translate into eased cross-border tensions? No more than it would change the weather on Mars.

We have escaped relatively lightly in this first week of the ‘two sessions’ marathon bore-fest snooze-in. If the slogans have any meaning it is intolerance, resentment and hatred to Hong Kong for being different and uppity and clinging to the wrong values. You must be punished – for not censoring the Internet, for not putting poison in your milk powder, for not producing counterfeit Ferrero Rocher chocolates, for not kicking penguins when you go to the Antarctic. That’s the message. 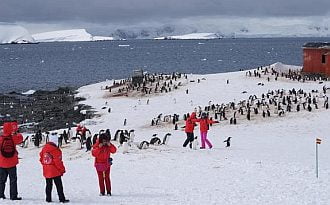