While we are all snoring our asses off jumping up and down in frenzied anticipation about today’s Budget, it might be a good time to revisit Financial Secretary John Tsang.

Since assuming office in 2007, the walrus-impersonating kung fu-master has made the

crafting of government fiscal policy into a form of obsessive-compulsive disorder. Every year he predicts a deficit and warns of disaster – even invoking such calamities as Greece. And every year he reports a massive surplus. He stashes the bulk of this away alongside the existing HK$1.7 trillion (or whatever) of reserves; like a squirrel storing nuts in the lead-up to winter, he has probably forgotten where half of it is now. After warning of the pointlessness of throwing money away in the form of inane handouts, usually to people who don’t need to be told and don’t need it, he throws the money away in the form of the very same inane handouts.

If he had delivered this performance once, or maybe twice in a row, the citizens who created this wealth and by rights own it would regard him as incompetent. After eight straight years, it has become a source of wonder that he goes back and does it all yet again. And when he is not repeating this annual Budget charade, he spouts the same slogans about how an aging population will ruin the government’s finances, and proposes the same idiocies like convoluted new healthcare funding systems or measures to encourage ‘Islamic banking’.

But – and this is where the ‘revisit’ thing comes in – consider the things he has not done. He has not turned a widely respected police force into a thuggish political enforcement agency dedicated to pepper-spraying pro-democracy students. He has not taken part in witch hunts against academics or launched creepy and bizarre patriotic PLA-style Army Cadet units for school kids. He has not airily insisted that nothing’s happened after newspapers have their websites hacked or personnel assaulted. The closest he ever came to creating division and hatred in the community was to align himself with coffee-drinking elites who watch French movies. In an era when we are increasingly ruled by totalitarian-leaning 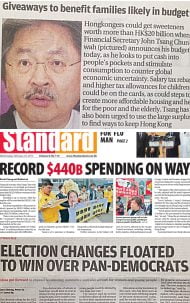 malevolence, we should treasure such plain and simple old-fashioned stupidity and ineptitude.

Which brings us to the latest development in the great political reform saga, which seemed so important before the Umbrella Movement stamped ‘Beside the Point’ if not ‘Dead on Arrival’ all over it late last year. The Election/Nomination Committee tasked with picking two or three Beijing-approved candidates for the 2017 Chief Executive election could be expanded from 1,200 to 1,600 with Extra Special Added Sectors for women, young people and – yes we’re getting desperate – civil servants. So an anonymous government source tells the South China Morning Post (perhaps on condition that the newspaper refers to the rubber-stamp body as ‘the electoral college’).

Adding seats to rigged bodies is the oldest and lamest trick in the Hong Kong non-democratization book. Although the Election Committee and the Legislative Council have been expanded over the years, the composition has remained in proportion – safely stacked with a smallish but dependable majority of members obedient to the Chinese Communist Party, plus another 30% or 40% who are semi-reliable shoe-shiners, and a small rump of pro-democrats for window dressing. This promises to be more of the same.

Let’s say there would be 100 new seats for ‘young people’. Typically, maybe 20 of these members would be directly elected by members of student unions – meaning most would be pro-democrats. But another 30 would be returned by (say) youth bodies from the Boy Scouts to the HK Army Cadet Red Guards, whose grown-up and pro-establishment leaders would pick suitably sensible individuals. And the remaining 50 would be chosen by other community organizations, which on closer inspection would mostly turn out to be United Front groups. The SCMP source maintains that it would be more one-man-one-vote than this, but we can be sure the net result would be the status quo: a body that delivers a result predetermined by Beijing. (Why not chuck in a Middle-Aged Private-Sector Guys’ Constituency while you’re at it?)

Why are they bothering? One possibility is that (mostly local) officials are genuinely alarmed at the prospect of pro-dem legislators vetoing the reform package and leaving Hong Kong less governable than ever. Another all-too believable possibility is that (mostly Beijing) officials are concerned that popular opinion is leaning too far in support of a veto, when the aim is to avoid even a managed form of universal suffrage as too worrying to the increasingly authoritarian Xi regime – and get the public to blame the evil pro-democrats for it. Or, of course, both.