What Jimmy Lai will tell us

“He makes the money, and he uses the money to support the anti-establishment movement, and that creates more noise, and sells more papers. That’s the game he’s playing,” said Mr. Tien.

Textiles scion and pro-establishment politician Michael Tien summarizes pro-democracy publisher Jimmy Lai’s business model: capitalizing on public demand for news and comment critical of the government. It is hard to say what Tien sees wrong with this. Is he criticizing the public for not wanting to pay money for pro-Beijing media product? Or is he denouncing the free-enterprise concept of making a profit by successfully competing in the market? Or perhaps he doesn’t mind either of these, but disapproves of donations to political causes – or at least particular ones.

Most other media groups in Hong Kong are now controlled by tycoons eager to appease the Chinese government – as any of us would be if much of our family wealth was invested in the high-growth-but-vindictive-government Mainland. And traditional newspapers have a hard enough time competing with the Internet without having to serve owners’ needs to shoe-shine the Chinese Communist Party. A 2013 Bloomberg story noted that since Malaysian tycoon Robert Kuok bought the South China Morning Post in 1993, the share price had declined 69% and the paper had been through 11 editors in 19 years. There must be cheaper, and less headache-inducing, ways to pay tribute to the emperor, but unlike Lai the loyalists don’t seem to have a choice.

As the New York Times story suggests, the fate of Jimmy Lai is a pointer for how Hong Kong will go – not just as a media hub, but as a free 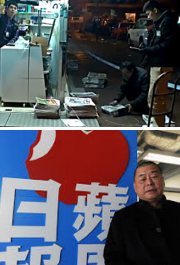 community. Last night there were some sort of fire-bomb attacks on Lai’s Next Media offices and home, and some kerfuffle in Tsimshatsui leaving copies of Apple Daily strewn around. It looks pretty amateurish, but it comes on top of pressure on conglomerates not to advertise in Lai’s publications, major hacking attacks and on-line theft of company documents (with no police investigation showing any apparent progress), mob-sieges of the company headquarters, lame smears about Lai’s supposed CIA/US ties, a high profile anti-corruption raid (with nothing to show), and Lai’s possible imminent arrest as ‘instigator’ or whatever of Occupy Central protests.

Taking each incident separately, you have a few pro-Beijing fanatics going too far or law enforcers simply doing their job; taken together, you clearly have a pattern: Beijing wants to bring Lai and Next Media down. Trumped-up ‘instigation’ charges aside, Lai is guilty of no more than making money through trashy, populist, tabloid, pro-democracy muckraking and donating to pro-democracy causes. Chinese government forces can destroy him and the business only through extra-legal means – hiring goons or subverting police or courts. Local officials will have to play along.

The whole 1997/handover project was always going to be a test of whether the Chinese Communist Party could handle a pluralist society. Over the years, quiet optimism gave way to occasional nagging doubts. The signs now are that the Leninist system really is incapable of co-existing with even one insulated and semi-detached city that is not under tight control. Jimmy Lai is a thick-skinned and hefty target, so his fate will tell us much about how far China can or will go.

15 Responses to What Jimmy Lai will tell us