Hong Kong’s political classes celebrate the season of goodwill to all men by furiously insisting everyone except themselves ‘lost’ the Occupy-Umbrella uprising that gripped the city in the last quarter of 2014. As Zhou Enlai might have said: it is too soon to say. What seems certain is that following the year’s ground-shifting events, quite a few of the lamer political wannabes in town are now seeing the word ‘loser’ when they look in the mirror, and are trying desperately to find a way to 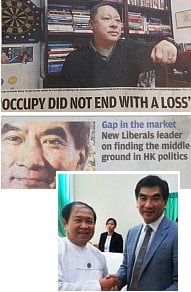 retain some shred of relevance.

In such an asymmetric conflict, broad public opinion – the sacred middle ground occupied by the famed silent majority – will be a deciding factor. But we are not talking about a static lump of the population with a casting vote. The fight will be over defining the middle ground rather than winning over a pre-existing one. In terms of resources, the advantage lies with the Communist Party’s United Front; its organization, grip on media and overall reach should enable it to intimidate the herds of obedient sheep into splitting away from a few uppity goats. But the experience of Hong Kong in 2014 showed the difficulties of using Leninist methods in a pluralistic society. It will take a far more subtle, warm-and-cuddly approach to get measurable public opinion behind the proposed system of guided democracy for the 2016-17 elections.

The Liberal Party’s new boss Felix Chung proclaims an opportunity for his faction to win over the ‘middle ground’. His reasoning seems to be that the Liberals oppose Chief Executive CY Leung, therefore the rest of us will naturally support this bunch of textile-fortunes heirs who believe that inherited wealth equals entitlement to political and economic power. This naïve idea is not new: former party chairman James Tien long dreamed of some sort of alliance between the billionaire-scions and the ‘middle class’ who are ripped off so systematically by his buddies’ cartels.

The Liberals are looking ahead and seeing a less comfortable future. Beijing does not plan a place for CIA-backed unpatriotic pro-democrats in tomorrow’s Hong Kong power structure, but it probably doesn’t intend on relying so much on co-opted rapacious local tycoons either. Meanwhile, Felix is also focusing on his other big opportunity: importation of Burmese house-elves.

The Liberals’ hoped-for ‘silent majority’ will also be targeted by lawmaker Regina Ip (whose New People’s Party’s number-two is Michael Tien, brother of James). Although relatively unencumbered by plutocrat tycoon baggage, Regina will forever carry the stain of Security Secretary ‘Broom-head’ who tried to ram through the Article 23 national security law in 2003, which prompted what was until 2014 Hong Kong’s biggest popular revolt and political crisis.

Regina’s ‘slightly sneering authoritarian’ thing has a populist appeal among a lower-middle class demographic, yielding sixth place – and a Legislative Council seat – in the Hong Kong Island constituency in 2012. But while the Liberals are trying to attract public support to compensate for their loss of favour in Beijing owing to their selfishness and unreliability, she is doing the opposite. She is driven by ambition to be the next CE and pure opportunism, and doesn’t care what the voters think because she knows Beijing is the only constituency that counts.

Her piece in yesterday’s South China Morning Post pushes the right buttons methodically. Occupy went out with a whimper … hundreds injured … a name-check for Eric X Li (the ‘CCP dictatorship as future that works’ guy) … possible overthrow of government … state of anarchy … pure universal suffrage versus law, order, stability, prosperity, (take a deep breath) integrity of family, respect for plurality … young people especially too stupid to understand Chinese culture and developmental problems… All wrapped up in a ‘great divide over core values’. It doesn’t matter that no-one reads the whole load of bilge through to the end. Indeed, like all ‘evidence of loyalty through recital of crap’ it’s best no-one does.

Maybe she is jumping the gun a bit. A campaign manager might advise her to focus on Beijing’s political reform package. Anyone who can sell that and get it up in the opinion polls in the coming months will get brownie points from the Central Government. Either way, the time will come when she has to portray herself as the Woman of the People, and ‘reach out’ to the masses. It will be good for a laugh.

Also taking part in this scramble for some sort of credible public backing, of course: the pro-democrats, in all their varying – and usually incompatible – degrees of respectability and radicalism. There was a time when Beijing could have conceded a bit symbolically on political reform, pushed an establishment moderate to identify with the package, and induced some milder pro-dems to split from the radicals and endorse it all. The genius of United Front tactics has been to enhance the pro-dems’ solidarity, if no-one else’s.