Hong Kong students start a five-day boycott of classes to protest the Chinese government’s plans for semi-quasi-democratic elections in the city in 2017. Youthful idealism and campus unrest add up to potent symbolism, which can energize and amplify political struggle, or sell movies. This week’s action may not exactly be Strawberry Statement, but if thousands join in, as organizers hope, it will be a first in Hong Kong.

In a society that takes education ultra-seriously, boycotting lessons seems almost perverse (sympathetic lecturers are promising participants catch-up classes). One Executive Council member who mocks the idea will strike a chord among more than a few citizens, especially those who never had a chance at college. Pro-dem academics meanwhile plead with the public for support.

As if to help them out, the Big Lychee’s plutocracy answers en masse a summons to Beijing. The tycoons will receive strict orders to fully support the official lines on the correctness of the proposed political reform and the dangers of pro-democracy sit-ins.

Someone in Beijing seems to imagine that the sight of octogenarian real-estate cartelist Lee Shau-kee of Henderson Land wagging his finger and demanding ‘constructive debate’ will impress us. It could instead horribly backfire, if the pro-dems seized on the cronyism and the way the Communist regime and local administration favour the interests of the property tycoons over everyone else. Should they need more ammunition, here it comes served on a plate with news that Mainlanders are back, buying up Hong Kong apartments to keep empty while ordinary residents can’t afford homes. The pro-dems could generate outrage with all this. But, infuriatingly, they won’t. It’ll be more blather about nominating committees; it is possible that they fear the responsibility of having a real impact.

So both Beijing and the pro-dems remain too obtuse to connect with broad public opinion. Whichever side manages to be that little bit less clueless is in with a chance. You wouldn’t normally pay much heed to Epoch Times – propaganda sheet for the creepy wacko quasi-Buddhist Falun Gong sect – and the South China Morning Post’s ‘City Beat’ column, which seems to be dictated by Beijing officials and/or the paper’s own octogenarian shoe-shining owner. But both oddly agree that the Chinese government might be about to turn on the charm for Hong Kong, with all the warmth a Communist dictatorship can muster. Behold a ‘much more relaxed definition’ of foreign running dogs we detest, and a rejigging of Legislative Council constituencies to squeeze out fringe lawmakers and boost chances for more mainstream bores. There’s also talk of opening up the business-dominated functional constituencies in 2020.

All about rearranging ornaments, really. But with the debate focused on theoretical political-process-within-a-one-party-state rather than on the rotten day-to-day outcomes of cronyism and cartels, the fight for public opinion will come down to such superficialities, however inspiring the students prove to be. 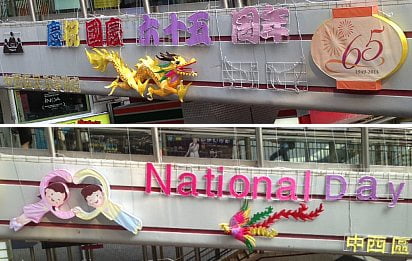