For several years, the Hong Kong Police have increasingly imposed annoying, if not vindictive, crowd-control measures during pro-democracy – but not other – gatherings. Now it seems Hong Kong Post and the Independent Commission Against Corruption are also being brought under the Chinese Communist Party’s local United Front.

The politicization of supposedly impartial institutions is disturbing for the obvious reason that it damages public trust in these services and ultimately undermines the rule of law. (The poor ICAC even pleads with us to accept it is acting impartially in raiding Jimmy Lai.) It is also shocking because it seems almost designed to heighten suspicion and hostility towards Beijing among even moderate Hong Kong people. Coming alongside Beijing’s plans for the most symbolically as well as practically ‘conservative’ nomination system for the 2017 election, it’s as if someone is deliberately trying to provoke radicalism and maximize support for Occupy Central.

One explanation is that the Chinese government’s paranoia about Hong Kong pro-democrats and the universe in general has overridden any sense of proportion. Everyone in the chain of command from the capital to the local Liaison Office and administration is under strict orders to go Maximum Apeshit over the pro-democrats. Too petrified to point out it might backfire, the functionaries go to work, and things get broken. Whatever happens, no-one will be liable to accusations that they didn’t try hard enough to Crush the Pan-Dem Enemy Without Mercy as per Zhongnanhai’s instructions.

Another explanation is that the Chinese government really wants Hong Kong people out on the streets and the pro-dem lawmakers to veto the political reform, just to plunge the city into chaos and provide an excuse to send the tanks in, or whatever the Xi-Jinping-as-Mandela equivalent is. The problem with this is that it means plunging financial markets and other inconveniences. (It’s also hard to imagine some local officials, for all their pitifulness at times, going along with overt and harsh direct rule.)

In the past, Hong Kong has usually had moderate politicians, reasonable media voices and neutral bureaucrats and business people with the wisdom and good humour to maintain some basic cohesion. Even after the Article 23 uproar, or Donald Tsang’s anti-democrat tantrums, some sort of civility returned. This time feels different. In its attempts to assert control, Beijing has polarized the city, and it looks permanent. If they’re going to use law enforcement agencies for political persecution stunts, what’s the point of being moderate and constructive?

Maybe Beijing will realize its tactics are overkill and counterproductive. Otherwise, the city is going to end up more alienated, more disgruntled, and less governable than ever. 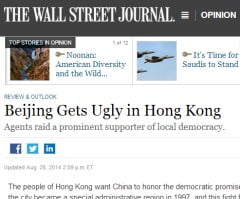