Thomas Yasuda, former boss of the First Pacific group, laments the Hong Kong establishment business community’s habit of pushing whatever political views it thinks will please Beijing, rather than being more assertive in taking a lead on issues like democracy. First Pacific – a conglomerate of non-Hong Kong/Cantonese Southeast Asian lineage – were always considered outsiders. But there is something undeniably pathetic about the sight of our local chambers of commerce lining up and dutifully spouting the Beijing-scripted alarmist predictions of damage if Occupy Central goes ahead.

Listening to their latest arguments, you get the impression they are maybe toning it down slightly, as if someone has worked out they need to strike a better balance

between pleasing Mainland officials and making fools of themselves. One of them on the radio this morning fretted that if lots of protestors sat down in Central, people on their way to the doctor would find it difficult. Still, their warnings of Thai-style mayhem sound silly, and the ‘threat’ of plummeting tourist numbers too good to be true, unfortunately.

The saddest – or, we may feel, funniest – part of this is that the Chinese Communist Party does not reciprocate support or loyalty. It is a system with no sentiment, and it will drop or simply crush corporate shoe-shiners and diehard devotees without hesitation the second it has no use for them.

It is not only desperate businessmen who obediently recite what they are told to say rather than exercise any independent opinion-forming or other civic leadership. Former civil servants who have transformed themselves into politicians on the make are, if anything, guiltier. Ex-Security Secretary Regina Ip’s determination to be Chief Executive has long since left her speaking other people’s minds. Today, in a letter to the South China Morning Post, she turns history on its head by blaming colonial governors of the 80s and 90s for creating Hong Kong people’s interest in representative government.

Perhaps the Brit governors’ were also responsible for the growth in political awareness and demands for democracy in South Korea and Taiwan at that time. Or maybe she is confusing cause and effect, and forgetting that the colonial government was adjusting, as best it could, to the rise of a middle-class society. Third explanation: she is talking rubbish in the hope that the Beijing officials who will decide the 2017 ballot will notice and approve. (To the extent that ‘democracy has become the vogue’ as a result of political leaders’ actions – as she maintains – it is surely due to the post-1997 administrations that have driven much of Hong Kong’s population to despair at their atrocious policies, not least blatant favouritism for property tycoons.)

The press is full of ‘Hong Kong at boiling point’ stories at the moment, following cyber-attacks, smears, contrived petition campaigns, and all the rest. The United Front push to squeeze the pan-dem/Occupy Central forces out of the mainstream and isolate them as lepers has an other-worldly feel to it, like some 1960s witch-hunt mobilizing illiterate villagers against rightist elements. Chairman Xi Jinping’s Internet clampdown and anti-corruption purge make a depressing backdrop.

If it’s any consolation, the Hong Kong stock market is happily hitting new-for-some-time highs around the 24,500 mark. The collective wisdom represented by millions of independent trading decisions has its limits, and there may be an element of catch-up with bubbles elsewhere, or irrational expectations of walls of money and through trains from Shanghai. But experience has shown that markets do detect – indeed often over-react – when things are going seriously wrong. The money says we will get over this. It certainly isn’t listening to the chambers’ crap about Occupy Central. 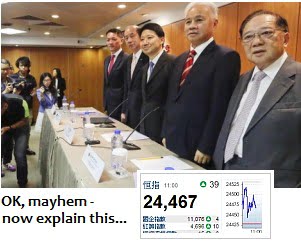