Real-estate valuations and the Pontikege Effect

The Yellow River, a historic cause of devastating floods, is often called China’s Sorrow. Under the ‘One Country, Two Systems’ principle, this does not apply in Hong Kong, which has its own separate misery: a parasitical real-estate industry. 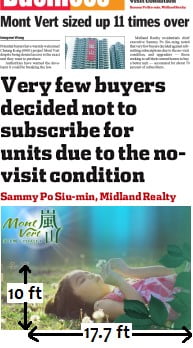 The city’s housing market never ceases to horrify. Last week, developer Cheung Kong announced the sale of apartments at Mont Vert, near Tai Po, a sort of inconvenient but nicer version of Shatin, up in the New Territories. Some of the units were as small as 177 square feet and habitable only by extra-tiny dwarfs. Furthermore, the developer barred buyers from inspecting the site itself, requiring them to make their decision after viewing a (let’s say) possibly misleading mock-up ‘show flat’ at another location – an arrangement that may not even be legal. On top of that, the buildings are next to a graveyard emanating a non-stop, high-volume barrage of creepy and malevolent feng-shui vibes.

In a sane world, you wouldn’t expect many takers. But this is Hong Kong, and over the weekend thousands of people stampeded to snap up the apartments. That, at least, is how the Standard reports it. The Standard talks up the property market as a favour to tycoons; developers also have their own ways of making demand look stronger than it really is (by concocting ‘thousands’ of would-be purchasers, for example). But even allowing for some exaggeration, it seems that quite a few people seriously want to buy these places.

It could be that the news coverage of the possible illegality of the sales spurred interest. That sounds crazy, but as they say: there’s no such thing as bad publicity. Especially when you’re Cheung Kong mega-tycoon Li Ka-shing. My theory is that the public hear that Li is making some extra cash by (possibly) bending the rules a bit; therefore, some of this wealth sort of rubs off onto you if you buy into what he’s offering. (It works with spin-off stock-market listings.) If that’s too illogical to imagine, it could just be that people have been successfully conditioned over the decades to enjoy being shafted by property tycoons, as if it is a pleasurable duty – indeed, a privilege.

The Standard notes that second-hand apartments in the neighbourhood are pricier than the new ones at Mont Vert. This looks like another mystery: it is as if we are in a parallel universe where the laws of economics are inverted. One perfectly feasible explanation is that older apartments are simply better – as in ‘less crappy in terms of quality and design’ – than recent construction. Another is that property sellers cannot mentally grasp the idea of prices coming down. This certainly happens with retail space in my neighbourhood, where landlords will forego many hundreds of thousands in rental income for months to satisfy their feeling of ‘not losing’.

Visiting Tai Po over the weekend, I was intrigued to find not only cheese- but chocolate-flavoured pontikege on sale…

And there I was all those years, unaware that pontikege of any description was available. Or, indeed, existed.

Note the discount: buy five of the things and you pay HK$16 rather than HK$22.50. With bargains like this on offer nearby, how can local property values fail to soar?