The big four accounting companies in Hong Kong like Ernst and Young and KPMG finished last week with a lame newspaper ad claiming that civil disobedience will be bad for business. These are the same clowns who signed off on the sub-prime loans derivatives horrors at Lehmans, not to mention Bernie Madoff and the dot-com-bubble junk before that, so we can safely conclude that a pro-democracy sit-in will in fact send the stock market soaring 10% overnight.

And with that, the orchestrated ranting about Hong Kong’s Occupy Central movement and its ‘civil referendum’ suddenly goes rather quiet. No doubt thousands of bean-counters, ashamed at their loser companies’ uncoolness, rushed to take part at the last minute. The referendum attracted just shy of 800,000 votes.

The government repeats its ‘not legally binding’ line for what must be the 100th time, and is so squeamish that it feels the need to put the word ‘results’ in inverted commas in its so-called press release…

But there is something semi-conciliatory about the tone of the official response. Insulting 100,000 people would be one thing, but insulting 800,000 – just days

before the July 1 march – is not smart. So Chief Secretary Carrie Lam sort-of concedes that the poll served as an expression of people’s opinions. The South China Morning Post intones that ‘the people have spoken’ and the Standard carries a heart-warming story of an entire family turning out to vote. Both papers report the referendum’s results as if they actually mean something (for the record, the Alliance for Democracy’s proposed nomination method came out on top).

This is flattering to the Occupy Central organizers. Voters were given three options, all of which are clearly unacceptable to Beijing and can’t happen. The poll results would have had far more integrity if the ballot had included the choice of a Beijing-compatible framework, and even an outright rejection of universal suffrage (also contrary to Chinese government policy). As it is, it’s irrelevant: the result that matters is the size of the turnout.

An anonymous Mainland source involved in drafting Beijing’s white paper on One Country Two Systems tells the SCMP that, now he thinks about it, the document was a lousy way to communicate. One of the paper’s hand-wringing, opinion-lite columnists ventures to suggest that Beijing’s ‘scolding’ is unhelpful (though of course it is Hong Kong that’s insecure). The big story is that it takes 800,000 people to get this message across.

Aside from accountants enraged by their bosses’ shoe-shining, why did so many people take part in the referendum? Obviously, the organizers owe Beijing for that backlash-provoking heavy-handed intervention. But the overriding reason should be that people are angry at the way everything is going. That’s the answer that confirms to Beijing that change is unavoidable.

Single-issue protests like those over the Northeast New Territories development plans are effects rather than causes of the basic problem, and they probably distract from that core message. The July 1 march will push everything from anti-incinerators to migrant workers’ rights to gay marriage. The traditional democracy-as-an-end-in-itself lobby are of course one of those single-issue groups. Whatever the turnout on Tuesday, it probably won’t have 2003’s Tung-stand-down unity of purpose.

Chances are that it won’t matter, and 2014 as a whole will emerge as a bigger turning point than 2003 (or some sort of conclusion to it). Beijing must realize by now that it has directly or indirectly misgoverned Hong Kong since 1997. Specifically, it further tilted the playing field to favour the property tycoons and other vested interests. The idea would have been to consolidate its United Front support base. In practice, it undermined local support by alienating the mass of the local population, who had to pay the price for the favours.

The Chinese Communist Party cadres must look at Hong Kong and see how some uncharismatic weedy geek like Benny Tai and his pals can motivate such a large proportion of the city’s population, get them feeling inspired and proud, and give them a sense of achievement and not a little joy and optimism (assuming the CIA funding thing won’t wash). And, reading the 800,000 number, they must ask: why can’t we do that? Or at least, they should. 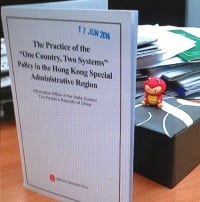 A two-week trip beckons, so there will be fewer updates here until mid-July. And what there is will be silly stuff, like a backlog of recipes, probably.