Winky the jewellery store salesgirl stares wistfully into the distance, her future suddenly bleak and uncertain. If she loses her job, her world collapses. After seven years’ toil, she has saved half of what she needs for a 20% deposit on a 310 sq ft apartment in Yuen Long – a dream now shattered. Her hopes of helping her parents out with her kid brother’s elite kindergarten fees, now doubled due to a rent increase, are dashed. In the worst-case scenario, retailers might cut their advertising budgets. Hong Kong luxury retail sales have plunged. Mainland officials have stopped bribing each other with Rolexes. We are doomed. Financial Secretary John Tsang says so. I must go and slash my wrists.

Meanwhile, the rest of the world – or at least certain parts of it – react with bemused disbelief at the news that Hong Kong textbooks contain blatantly racist stereotypes. Publishers protest innocence, and in so doing encourage the stereotype of the Chinese as a people who see the world divided between ‘Han’ and ‘foreign’ and can’t comprehend the idea that skin colour, culture and nationality might not correlate. Hence the now-notorious attempt to define racial harmony in terms of British = teacher, Japanese = sushi chef, Filipino = maid.

I had a chance to flick through more of this stuff over the weekend, and the overriding impression is that the textbook authors and publishers are themselves alien to the subject, and have quite possibly never known a non-Han person as a friend or in any capacity beyond teacher/maid/etc. They don’t realize how embarrassing and clumsy they are being. Consider the following extract… 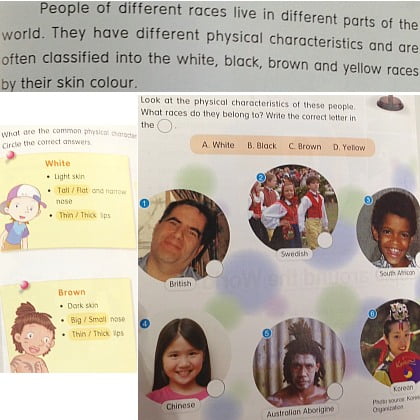 I suspect this was done in perfectly good faith. The British guy is an overweight white slob. The Swedish are blonds yodeling in the fjords with their cuckoo clocks. The grinning South African kid looks like an extra from the Cosby Show. The Australian Aborigine is some paint-covered cannibal with a bone through his nose. The book’s authors actually have no idea what Brits, Swedes, South Africans or Australian Aborigines look like, any more than they can get their head around a British street cleaner or a Filipino airline pilot. The cartoon white kid (tall nose) has a baseball cap; the brown kid (thick lips) has tribal tattoos and probably a collection of shrunken heads.

The authors are writing this course segment because they have been told to. And what this whole controversy is about is not just the unthinking casual attitudes of non-cosmopolitan Hong Kong, but the crassness of the education system.

I bet that what happened was this: some time ago, well-meaning officials decreed that schools should address race, culture and diversity. How? One way would be to get little kids of different ethnic groups to visit one another’s schools or homes – to mix a bit and experience a non-homogenous society (Hong Kong is roughly 95% ethnic Chinese and many schools, neighbourhoods, TV shows and much else are essentially 99% Han). But that’s not how schools here work. Kids have to learn facts on which they can be tested. Thus, racial and cultural awareness becomes a series of targets in a curriculum to be ticked off in the classroom. Textbook writers are drafted in to do the best they can, which is, yes, horribly crass…

The self-assessment sheet above (I think this is aimed at roughly 8-10-year-olds) makes this pretty clear: students must learn X, Y and Z, and thus they successfully get a pass in ‘accepting the cultures of others’, as the officials intended (the wording here is probably adapted straight from the Education Bureau’s outcome guidelines).

Obviously, this whole saga is about unconscious racism and textbook authors whose ignorance is truly cringe-making. The ‘I can list the customs of different races’ is bizarre, conjuring up visions of Blacks’ innate sense of rhythm, the inscrutability of the Yellow man and the way Brown/White people smell funny because they eat curry/cheese. (No place for Redskins in the Big Lychee, it seems.) The continuous theme of four races named by skin colour and the subliminal association of darker skin with backwardness or inferiority is similarly jaw-dropping – these ideas were last openly embraced in polite society by Victorian Westerners seeking a Darwinian, scientific justification for racial (and broader social and economic) supremacist policies.

But the Hong Kong authors know no better. Why didn’t the publishers find authors who had a clue? Because they, too, live in an all-Canto cave, through no fault of their own. It would never have occurred to any of them, for example, that some of the kids using this textbook will be non-Chinese.

But maybe the fundamental issue is why does this almost-laughable obliviousness appear in print as a list of items to be learned by rote with zero understanding required? The answer must be because the mindset of officials/schools/parents is as blinkered about the point of education as it is about a concept like ethnicity.