Another day, another exciting list ranking places in order of wonderfulness. Behold the IMD 2014 World Competitiveness Thing. The (apparently ultra-prestigious, oh-so-high-class) Swiss business school seems pretty laid back about the results: “There are no big changes in the top 10,” it says, with the US coming in first again, while “small economies like Switzerland (2), Singapore (3) and Hong Kong (4) continue to prosper thanks to exports, business efficiency and innovation.” I briefly question why they group exports, which are surely a result of competitiveness, alongside business efficiency and innovation, which are causes; but they’re not really suggesting otherwise. So that’s that – we can move on.

The Big Lychee has apparently slipped a place and has been replaced by Singapore. We could freak out at the horror. Or we could remind ourselves not to take these rankings too seriously. IMD compiles its list two-thirds on the basis of selected statistics with particular weightings – in other words, dozens or hundreds of other data sets could have been used, probably producing different results – and one-third using opinion surveys of CEOs, which come down to anecdote. The output can only be pretty arbitrary.

For example, IMD seems to take exports very seriously. In Singapore, they bring in low-paid workers from Indonesia to toil away in factories assembling stuff like electronics, and then they ship the finished products overseas. In Hong Kong, we import what are in fact finished products made over the border, pretend to process them in such a way as to hugely increase their value (compared with that declared to gullible Chinese revenue authorities), but actually do nothing except ship them on overseas. Who, I ask, is working smarter here: Singapore, transporting Third-World labour into town to make stuff, or Hong Kong, sitting on its 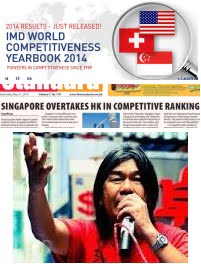 backside and just watching the money roll in? But IMD presumably doesn’t make a distinction.

Nonetheless, these lists present everyone with a superb opportunity to wet themselves in order to make a point. A prolific China Daily columnist called Staff Writer sees Hong Kong spiraling downwards. He declares: “Let’s be honest with ourselves and frankly examine what’s become increasingly off-putting about Hong Kong,” before blaming our shocking decline on ‘endless political bickering’, notably the pro-democracy Occupy Central movement and Long Hair Leung Kwok-hung’s filibustering in the Legislative Council. The IMD report costs 800 Swiss Francs, but I’ll guess it doesn’t mention Long Hair once.

Other groups would come up with their own self-serving explanations of Hong Kong’s descent to fourth place. Certain letter-writers to the South China Morning Post will insist that the lack of English commentary on a cable TV channel’s sports coverage proves this city is finished. Others, perhaps with a bit more cause, argue that the high price of non-local schooling discourages mobile talent from settling here. Parasites looking for handouts (or politicians looking for votes) will claim that transfers of public resources to this or that ‘sector’ will conjure life-saving ‘innovation’ or ‘creativity’ or some magic hub out of nowhere. A lot of people would cite air pollution as something ‘increasingly off-putting’. Economists will say it comes down to relative costs, work-force productivity, infrastructure, regulation and tax burdens, more or less in that order.

The idea that the Lion City is more competitive than the Big Lychee is faintly ludicrous, not least because Singapore is just so cringe-makingly uncool (and I can’t believe they’ve left that video on-line – what can they be thinking?). For those who demand hard, quantifiable data, I can prove it with just one damning statistic.