RTHK3 this morning reported her fear that extremists could hijack Occupy Central’s civil disobedience activities, and her regret that the consultation on political reform had

become focused on open nomination of candidates for the Chief Executive election, which seems clearly forbidden by the Basic Law. The voice of reason.

The South China Morning Post, on the other hand, reports her comments that Hong Kong has the ‘most ridiculous political system in the world’ and is enduring a sort of bad dream as a result:

“Every single member of the Legislative Council stands always poised, ready to form the disloyal opposition to a chief executive who is specifically not allowed to have a political party of his own.

“That Legislative Council is formed partly from functional constituencies, some of which are as bad as the rotten boroughs that tainted 19th-century England, with tiny electorates with their own agenda, [while] the geographical constituencies… are elected by a very odd proportional representation system, which is actually skewed in such a way as to ensure that more radical candidates have a very high chance of being elected.”

These are not new points, but they neatly encapsulate the idiocy of the political system. Hong Kong people can elect an opposition, but not the government. The functional constituencies are a recipe for empowering vested interests, thus ensuring unfairness and disharmony. The bizarre election system for geographical constituencies allows extremists unable to get more than 10-15% of the vote to win seats.

The on-line SCMP gives this story some prominence, which in turn attracts an outpouring of readers’ comments. Cartland is an ex-colonial official and white, so predictably quite a lot of them make the even more unoriginal point about how the British didn’t give Hong Kong democracy for 100 years. Anyone who can be bothered to counter this can say that: Beijing expressly opposed political reform (let alone independence) for Hong Kong pre-1997; people loudly report being less happy since 1997; and 17 years after the handover, it’s irrelevant. The fact is that we have this system now because Beijing imposes it – and it’s clearly not working, and everyone’s angry.

Still, Cartland – like Anson Chan – was a member of the oh-so elite, high-flying and famously infallible Administrative Officer caste in the late 80s when Governor David Wilson rigged a public consultation on political reform far more cynically, blatantly and contemptuously than Carrie Lam and her buddies would have dared try with this recent exercise. She might have been Assistant Deputy Sub-Manager of the Paper Clips Dept at the time, but she was somewhere there. You can’t completely ignore it (perhaps she elaborates in her book).

Maybe her use of the fairy tale The Sleeping Beauty as an allegory in her FCC comments (good and bad godmothers and so on) is a way of resolving this slight ‘contradiction’, as they say up north. So I refresh my memory and revisit the story. It’s nasty, with snakes and attempted cannibalism and – the bit that did permanent psychological damage to me as a kid – a sharp piece of wood piercing a finger. Sadly, I find nothing in the plot that absolves colonial-era civil servants from any connection with, well, the colonial-era civil service. But I do read that ‘The king forbids spinning on spinning-wheels or spindles, or the possession of one, throughout the kingdom, upon pain of death.’ Substitute ‘watching The Big Bang Theory’ for ‘spindles’ and maybe she’s on to something.

Meanwhile, the SCMP’s owners are trying to take the listed company private and so are probably too distracted to monitor the paper’s day-to-day self-censorship regime. As a result, the editors are letting their hair down, to the extent that we even get blatant insults aimed at a business partner, even family friend, who owns many important providers of advertising revenue… 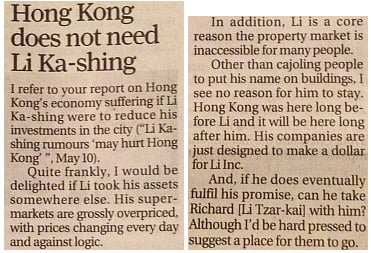 The Kuoks will be hearing from Mr Li’s people.