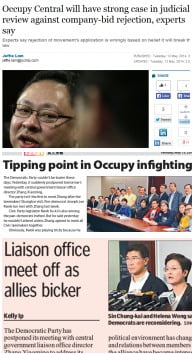 the corporate status required for such formalities as opening a bank account. Since they’ve come this far using other organizations’ facilities, it seems as much symbolic as anything. But then so is the decision of the Registry. Presumably the department was under pressure because of Beijing’s near-paranoia about the whole civil disobedience concept. Normal Hong Kong pluralism had to be briefly put on hold while our front-line public officials awkwardly administered the hasty smack of authoritarianism, just like the times Falun Gong wackos are turned away at the airport. Only takes a few minutes – then it’s back to ‘Two Systems’ again.

Otherwise, Occupy Central and its core member groups are having a tough time. Hong Kong’s ‘pro-democrats’ are more than a very broad spectrum: they are almost everything that’s left after you subtract the devout Communists, the pro-Beijing shoe-shiners and the don’t-knows from the whole population. No-one can be in charge, and many of the various sub-cultures’ leaders hate each other – as you would expect if you put a bunch of priests, lawyers and Trotskyites into a confined space. On top of that, the most respectable active figures long ago succumbed to a terrible vice: an obsession with structures and procedures at the expense of outcomes (perhaps a result of post-1997 ostracism by the ruling establishment leaving them with nothing to do). Thus Occupy Central is looking like a mess, with rabidly purist teenage radicals declaring war on the moderate bourgeois fuddy-duddies. Little wonder that the Democratic Party is calling off its meeting with Beijing officials.

In the gleaming towers of capitalism at the very heart of Asia’s leading international business hub, property managers are nonetheless taking precautions. Most of the time, these unsung heroes of city life concern themselves with maintaining elevators, keeping Nepalese window-cleaners safely in their ‘gondolas’ and overhauling those giant rooftop air-conditioning units that give passing black kites welcome thermals. They send the security guards around to stop tourists from sitting down on what looks like seating outside the entrance, and direct the cleaners to mop the floor in the lobby every minute, no matter how spotless. When it rains they make sure a cruddy carpet is taped over the deadly-when-wet, oh-so high-class marble. The highlight of the month is the fire drill. Things get really exciting when a half-famous tycoon with a colourful past comes for a board meeting on a top floor, and the media need to be penned up behind an elegant rope. And right now, they are preparing contingency plans for possible chaos in case Occupy Central – or as the memos to tenants defiantly put it, “Occupy Central” – does whatever it’s going to do.

The expectation is that protestors will storm the barricades. The big fear is that they will pour into the lobby and make it impossible for the office workers to come and go. Another concern is that the activists will block a nearby MTR exit. The carefully drawn-up emergency response strategy involves, um, additional plump middle-aged women in uniforms burly security guards, extra ‘communication’ with tenants (through means yet to be decided, maybe telepathy) and plentiful and close ‘liaison’ with the police (of whom, it is assumed, large numbers will be available and free to attend to our particular building’s needs instantly).

It is hard to tell who to take less seriously. We have heard of an irresistible force meeting an immovable object. This will be like a herd of one-legged bunny rabbits trying to overrun a kindergarten during nap time.