The weekend begins with an invitation to wet ourselves with utter delight on learning that the ‘through-train’ is going to happen, allowing Mainland and overseas investors to trade Hong Kong and Shanghai-listed equities across the border.

Back in 2007, the Hang Seng Index hit 31,000 in anticipation of a similarly named arrangement. Metaphors

clashed as commentators had visions of the locomotive bringing with it a ‘wall of money’. The cash would come cascading down upon us because letting Mainlanders directly buy Hong Kong stocks would effectively give them the right to move wealth out of the country as if there were no capital controls.

Why did anyone seriously think that the Chinese government would allow such a gaping, potentially economy-wrecking, loophole? Authorities in Tianjin – the dumplings-and-seaport hub up the road from Beijing – had succumbed to the ‘press button and create instant international financial zone’ delusions suffered by Shanghai, Qianhai, etc, etc, and announced that they would have sole control of the Mainland end of the loophole. OK, so looking back it doesn’t seem much of a reason, but Tianjin had this sort of vaguely-heard-of-the-place feel about it, which gave the story a kind of credibility, and people wanted to believe in this vast rent-seeking free lunch. Needless to say, it was all ultimately BS.

This time round it’s a far more modest-sounding deal, in line with the ‘feeling the stones to cross the river and taking ages about it’ approach to liberalization that makes watching paint drying so fun. The Mainland’s small retail investors won’t be allowed to join in (probably just as well), and the cross-border trading will be subject to a quota that could be exhausted after a couple of weeks. The Hang Seng Index bounced a bit yesterday, then started off this morning falling back slightly, 31,000 remaining as distant a memory as ever. The main beneficiaries seem to have been shares in Macau casinos, which the market thinks Mainland investors will want to get their hands on – money laundering by investing in money launderers? We’re supposed to get worked up about the fact that Hong Kong people will be able to buy Mainland shares directly. Don’t all rush.

Still, it was announced by Premier Li Keqian at the Boao bore-fest in Hainan, so everyone must give him lots of face by frenziedly jumping up and down with their hands flapping wildly and eyes bulging, preferably ullulating like crazed Arab women. The South China Morning Post quotes some guy as saying this will “remove the last restrictions on the capital account” between the Mainland and Hong Kong (ie the rest of the planet). And Chief Executive CY Leung thanks the Chinese government for the initiative, as if – like face masks during SARS or 10 million shoppers a week – it’s something to be pitifully grateful for. Dance with glee we must. 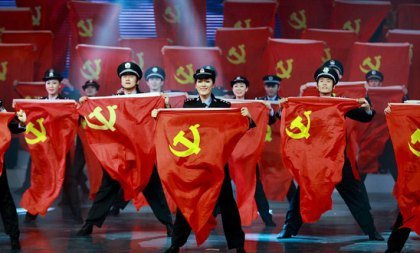 The only people who aren’t acting deliriously happy are Hong Kong’s ever-miserable, sour-faced small brokers, who have to find fault with everything and fear that their slowness, inefficiency and need for kindergarten-style afternoon naps might divert the limited benefits of this small-scale free lunch to their big rivals. I declare the weekend open with the thought: how tragic.