I’m now on Twitter, which means I get a stream of interesting bits and pieces like this picture of kids in New York. The parallels between the Taiwan and Hong Kong ‘Occupy’ movements are not exact, but close enough to be intriguing.

In Taipei, the demonstrators are opposing a services-trade pact with China, which was negotiated behind closed doors and which, many fear, will lead to economic and broader ‘Mainlandization’ of the sort Hong Kong is undergoing through the invasion by millions of cross-border shoppers. In the Big Lychee, the planned protest in Central is focused on demands for a more democratic political structure, as Taiwan has had since the late 1980s. So there’s a quirky parallel: Taiwan’s activists want to avoid emulating 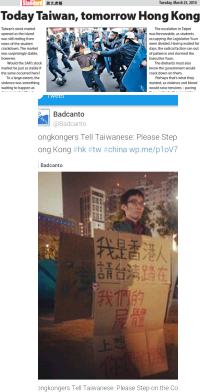 In both cases, the protestors aim to defend their society from being swamped and absorbed politically and culturally by the vast, dictatorial, thus alien, force that is China. In both cases, they are opposed by commercial interests that see great opportunities in integration and would argue (as the Standard’s half-crazed editorial does today) that the greater risk is death from economic stagnation and irrelevance. So this is a clash of perceived priorities, values and freedoms: one person’s political and cultural rights versus another person’s economic liberties.

In both cases, the activists are predominantly young, but with a significant strand of support and some leadership from older generations. There was a time when we would have noted that Taiwan is divided between two groups: Fujianese-speaking natives with a soft spot for the old Japanese colonial rule, and post-1949 settlers from the Mainland who assumed and abused power. And we would have pointed out that Hong Kong lacks a comparable split. But maybe now we wouldn’t be so sure.

And in both places – and everywhere else from Xinjiang down to the South China Sea – is the gradually and ceaselessly tightening grip of Beijing.

There must be some sort of ‘win-win’, surely? Hongkongers have been present at the protests in Taipei, no doubt picking up useful tips on crashing legislative chambers or learning ‘how to avoid chaos’. This is about integration, after all – reunite the motherland you want, not someone else’s.

As we mull over such profound matters, it is easy to forget that the Hong Kong Democratic Party exists. As did the voters in South Horizons West when they voted on Sunday to fill a vacant seat on Southern District Council. The DP are going to do some soul-searching to find out how their candidate managed to come last. Can’t blame them. Where do we start?

They can’t use a low turnout as an excuse: over half the electorate took the time to go to the polling station, which is impressive for an itsy-bitsy District Council by-election. They can’t point the finger at the radical People Power Party for splitting the vote: the New People’s Party winner (with no other pro-establishment faction in the running) won more votes than the other two put together, and the result suggests that if any opposition player should have stood aside, it was the DP.

What about personalities? I’ve met Sin Chung-kai, and I can say he’s a smart, decent and pleasant guy. Too bad that People Power had a former Miss Hong Kong on the ballot, and a pity that the NPP’s pink-clad Judy Chan is by all accounts a popular neighbourhood busybody. Maybe the DP could have found someone a bit fresher, younger, zappier, and perhaps active in the community, if not a beauty queen? Or perhaps they couldn’t. In fact, we can suspect they almost certainly couldn’t.

Could it be anything to with policies, or at least some sort of content or substance? With ex-Security Secretary Regina Ip’s NPP coming top, possibly not. That said, they obviously succeeded in appearing to represent something, however insipid it might be. But not only did the DP fail to attract voters looking for a positive stance of some sort, they managed to fail to get the protest vote as well.

Perhaps Chairperson Emily Lau and her colleagues could examine the gap between what voters want a political party to do and what the DP’s venerable members actually enjoy doing. And they might discover that the best course of action would be to split the party into two separate organizations: a think-tank/pressure group that talks endlessly about electoral structures and lobbies nobly for universal suffrage; and a political party that gets broken street lights fixed, stirs up trouble by calling for fewer Mainland shoppers and gleefully smears the Judy Chans of this world for serving tycoons and Communists when elections come round.