Greg So hijacks SCMP editorial column, not many hurt

The Hong Kong tourism debate degenerates into tertiary-stage syphilis. Mentally deranged Commerce and Economic Development Secretary Greg So tells lawmakers that the government will try to divert the anticipated extra 50 million annual visitors around all 18 districts of the city. He will achieve this by ‘increasing the number of tourism spots’, despite what appears to be a dire shortage of ‘spots’ for Hong Kong people. (On the radio today he seemed to say that he would ‘spread the benefits’ around all 18 districts – but I assume the Legislative Council interpreter was on hallucinogenic mushrooms.)

Meanwhile the South China Morning Post supports the So line in an intriguing editorial. The piece starts off blithely contradicting itself, then slides into

economic illiteracy, and finally undermines itself either out of carelessness or, one suspects, deliberate subversion.

It begins by essentially conceding (citing its own reporting) that the city is practically full. Then, as if the content of those first two paragraphs did not exist, it recites the ‘we have no choice and it is good for us’ idiocy that we get from government officials and the tourism/landlord lobby when they insist on somehow stuffing more visitors in.

From jewellery stores and high-end restaurants to toiletries and infant milk formula, our cash-rich neighbours are now the economic lifeline of our tourism, retail and catering sectors.

Talk about getting it back to front. The jewellery, high-end restaurant, toiletries and infant milk formula trades are a parasitical growth, choking the rest of ‘our tourism, retail and catering sectors’. The truth – obvious to anyone unfortunate enough to pass through afflicted neighbourhoods – is that their spread is the result of artificial market distortions. It is not some wholesome advance in efficiency or productivity to be encouraged. The worst response is to increase the supply of ‘cash-rich neighbours’ that feeds them.

After this disastrous attempt at economic – or any – logic, the writer does a bit more ‘it’s terrible but OK really’, then sees he is approaching his word-count (some parts of Hong Kong have finite capacity). And suddenly we plunge into a stream of bureaucratic semi-consciousness…

…shutting tourists out is not an option. In the increasingly competitive world of tourism, every city wants a bigger share of the market. Official figures put the economic benefits brought by the individual visitor scheme at HK$26 billion in 2012.

Imposing a cap on arrivals is therefore unwise and unnecessary. Nor should the negative impact brought by the tourism boom be blown out of proportion. Hong Kong is not the only place overrun by tourists. As we enjoy the economic benefits, we should be prepared for the undesirable outcomes. The invisible hand of the free market will strike the right balance…

Where have we seen and heard this insistent, strident, hectoring, monotone, deaf, robotic and supremely unconvincing style of language before? Why, that’s right: in countless Hong Kong Government ‘Lines to Take’. I don’t have this one at hand, but I can safely say that it is one. They are instantly recognizable and almost beyond parody. (And put together purely to appease the senior officials who sign off on them; only a Big Lychee civil servant could accept the proposition that we must cram more tourists in because other cities are competing for them.)

It’s almost as if   Obviously, some SCMP deputy editor slapped it down on a hapless scribe’s desk and announced: “The Assistant Under-Sub-Secretary at the Commerce Bureau wants this in for tomorrow.” No other explanation for the attentive and devoted drafting of the piece will suffice.

As it happens, the Business section of the SCMP – which seems to be on a planet apart from the rest of the paper – spelt it out a week ago: Hong Kong as an economy and a society would be better off without its ‘tourism industry’. 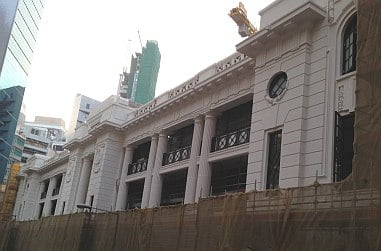 Good news for the hordes of tourists who come up to Hollywood Road to take photos of a historic monument only to find that it is forever wrapped up in heavy-duty construction netting: the old Police Station, formerly grey and peeling, is unveiled in sparkling neo-classical white. Now please proceed to Lyndhurst Terrace to block the sidewalk and take selfies outside the egg tart shop.

21 Responses to Greg So hijacks SCMP editorial column, not many hurt