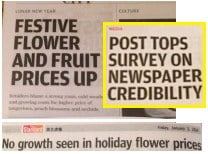 With Chinese New Year fast approaching, we are all avidly chomping at the bit to go out and buy lots of lovely flowers. But we are gripped by a critical question: will the blooms be more expensive than last year, or will the prices be the same? For the answer, we turn to our ever-informative press. The South China Morning Post is in no doubt that they’re going up. The Standard, on the other hand, says they will stay the same. To help us decide who’s right, the SCMP has an adjacent item reporting, in all modesty, that it is Hong Kong’s most trusted newspaper. The Standard, sadly, lacks the space in its tabloid format to carry the story. The tentative conclusion is that we will indeed pay more this year for plants’ sex organs.

The SCMP article and most everyone else lament that Asia’s journal of record comes top of the list at least to some extent by default; the public thinks the rest of the Hong Kong press is worse, and confidence in print media is lower than ever. What the Chinese University survey doesn’t mention is that we might actually like it that way. Jimmy Lai’s Apple Daily and Sharp Daily come near the bottom of the table, alongside the Communist-funded propaganda sheets – but their circulation figures suggest a lot of readers just can’t resist them.

The Big Lychee’s official least-bad newspaper achieves its status partly by eschewing too much celebrity pap, pictures of mutilated bodies in car crashes and overly obvious shoe-shining of tycoons (through, say, free advertising for their latest rip-off property development). It tries to keep self-censorship to Mondays, Wednesdays, Thursdays and Saturdays only. The deal seems to be that one negative story on human rights in the Mainland needs to be balanced with one about the Motherland’s latest smiling astronaut plus one about the aircraft carrier Liaoning valiantly sailing bare-decked up and down the South China Sea. Downplaying or ignoring sensitive stories risks turning them into high-profile extravaganzas, so the policy seems to be to cover subjects like princelings’ fortunes just enough to keep everyone’s embarrassment to a minimum.

Incisive comment mostly vanished long ago with the likes of Willy Lam and Jasper Becker (Jake van der Kamp and Tom Holland survive in the business section, where one’s wife or servants won’t read them). Where Hong Kong affairs are concerned, balance requires one rabidly anti-democrat opinion piece by psychopath-communist Lau Nai-keung for each badly-argued, shoot-from-the-hip anti-establishment column by Albert Cheng, both leavened by 20 child-like commentators pleading along the lines of ‘why oh why can’t we have a consensus and make everything nice?’ Editorials – last time we checked – are similarly insipid, essentially swallowing falsehoods without question (‘tourism/integration/property rah-rah’) or arguing that a government policy or decision that is half crap and half OK works out as ideal and perfect. Unquestioning blandness, plus a bit of idiocy, and little or no serious ideas or questioning. At least you get through it pretty quickly. And the rest, recall, are all worse (as, indeed, is pretty much every English-language counterpart in the rest of Asia).

And you get the occasional scoop. I declare the weekend open with an SCMP exclusive uncovering the Chinese Coastguard service’s refreshingly – nay, magnificently – forthright line on hot air balloonists: ‘screw the bastards’…

5 Responses to SCMP named most wonderful paper in solar system