Tiresome nonentities who produce trashy ‘surveys’ seem to go from strength to strength, churning out garbage labeled ‘data’ and getting gullible or desperate news media to take them seriously. Yesterday, it was accountants’ group CPA Australia announcing that three in 10 professionals in Hong Kong want to leave the city next year. By ‘professionals’, they presumably mean accountants and lawyers. We should be so lucky.

Today, a rather more sinister-sounding outfit called the China Institute of City Competitiveness unveils its latest findings, which show that after 10 years at the top, Hong Kong has suddenly dropped to 11th place, leaving it behind Shanghai, Beijing, Shenzhen, Guangzhou, etc. The guy behind this fascinating research is one Gui Qiangfang. The methodology is a bit hazy, but (in case you run a city and want to know how it’s done) he says: “Shanghai came in first this year because it has a pilot free trade zone.”

On the face of it, the CICC looks like a sort of freelance patriotic PR campaign to bring Hong Kong down a peg or two. This would fit in with the official Mainland-endorsed narrative that started post-SARS, amplified by local government and media, about how the Big Lychee has no future role, will be overtaken by the inevitable Shanghai, must ‘integrate’, must be obedient/servile/grateful, and you know the rest.

But, sadly, Gui’s operation does not appear to be such a paragon of selfless, wholesome and nationalistic virtue. A few years back, the CICC named Beijing China’s most beautiful city, when any right-thinking person knows it is, mostly, aesthetically charmless if not plain ugly. And more recently a disillusioned CICC hanger-on from the University of Hong Kong denounced the outfit as dishonest.

Essentially, Gui Qiangfang (luxury apartment in Kowloon, and head of a rancid-sounding World Air Stewardess Association) becomes an ‘advisor’ to a city, and the city gets a high ranking. Thus, as the SCMP report says, some place called Jinhua (whaddya mean ‘where?’) is number-one for harmonious development, and the infamous sprawling ghost town of Ordos hilariously makes it into the five most ‘competitive for investment’.

On the subject of whores, what would be the ratio of Shanghainese hookers plying their trade in Hong Kong to Hong Kong prostitutes doing business in and around the Pearl of Pilot Free Trade Zones? Would this crude measure of where the money is prove a more accurate indicator of economic competitiveness than the CICC’s?

The South China Morning Post, to its credit, seems to have rumbled Gui and his Institute. It is China Daily, however, that inadvertently joins all the dots in this 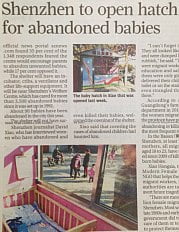 deliciously tawdry saga. It’s got the lot: the obsession with fatuous rankings; the mutual shoe-shining and ‘cooperation’ and murky rewards; and the clumsy political propaganda to warn Hong Kong to choose between loyalty or decline. In this case, the ‘scholar’ warns about the Big Lychee’s cultural gap with the Mainland. You couldn’t make it up.

Maybe if Hong Kong can’t catch up with Shanghai by scraping together a pilot free trade zone, it can always try to match Shenzhen – now 3rd in the list of Most Brilliant Chinese Cities in the Solar System – by having a competitive hatch for abandoned babies. You know you’ve really become a world-class city when you’ve got a baby hatch.