As if it suddenly found itself looking and feeling a bit stupid in the midst of an inappropriate rant about the 2010 Manila bus shootings, Hong Kong feigns a return to some sort of normalcy. The government, among others, dutifully prepares to release disaster relief funds for the Philippines. Current and former officials gathering at what sounds like an almost-parodic bore-fest drone on about Pearl River Delta free-trade zone-hubs, while landlord Allan Zeman reveals that “Beijing has lost faith in Hong Kong…” (and there we all were thinking it was the other way round). Across town, property-land visionary-wacko Franklin Lam claims Hong Kong needs 200,000 workers, and should look to Macau or Singapore as models – though imported labour recently became the first ever issue to provoke the Lion City’s usually docile people into open opposition to their authoritarian leadership. An elegant and pithy antidote to this raving ‘GDP figures over quality of life’ mentality comes from Alice Poon. (If only Franklin would read it. If he had a buddy called Franklin Lim, they could do a double-act called F.Lim-F.Lam.)

China Daily gives space to an expert in the Filipino language (or at least witty prankster), who clarifies everything: Manila can’t say sorry because they don’t have a word for it. The best they can manage is something similar to the Cantonese m’hou yi si, or simply a flippant ‘whatever, my bad’. So that’s sorted that out. (I never realized China Daily was so gullible.) One thing I do know about Philippine languages is that they have three words for ‘we’ or ‘us’: one means ‘everyone here’; one means ‘you and me (but not him/them)’; and another means ‘me and him/them (but not you)’. Well, I find it interesting.

Have you ever seen a load of men in suits crossing a river by feeling the stones while simultaneously killing chickens to scare monkeys? It’s less interesting than it sounds, even when they give it the scintillating title of the Third Plenum of the Chinese Communist Party’s 18th Central Committee. Experience strongly suggests that there is little correlation between official post-Plenum communiques and what eventually happens, but people have to write about something, don’t they? 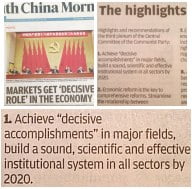 Maybe China is about to ‘unleash market forces’, as a gushing Financial Times believes, or maybe something else. How easy is it to peel princelings’ fingers from state-owned monopolies or get city slickers to share their municipal goodies with migrant peasants?

The South China Morning Post distills the gathering’s recommendations down to their purest essence. For example, ‘Build a sound, scientific and effective institutional system in all sectors by 2020’; sounds good – so much better than an unsound, unscientific and ineffective institutional system in all (or maybe just some?) sectors. Then there’s ‘Achieve “decisive accomplishments” in major fields’. Most analysts were expecting ‘Accomplish “decisive achievements” in major fields’. This is a major surprise.

Meanwhile, Christmas trees have already gone up in Chater House, the core of the core of Core Central…

Maybe they’ve been there for months and I didn’t notice. And far away from all that, nestled in the serene calm of Tai Tam Bay…

Yes, it’s an old Star Ferry. Renovated as a floating home, and providing – I can only imagine – some serious quantities of living space. Dashing over to 7-Eleven is a problem, but there’s a nice barbeque spot up on top (you could build a grill into the funnel). Do they say ‘upstairs’ and ‘downstairs’, or ‘first-class’ and ‘second-class’? Spies sailing past report that it houses a family, complete with a helper wielding a vacuum cleaner.

Which brings us to the slightly bedraggled and traumatized domestic helper who turned up yesterday after managing to get a flight out of Cebu. Eagerness to resume household duties was her third priority. Number-one was simply getting away to somewhere with guaranteed food, water and shelter, and a close number-two was a humble request for help. In brief: the storm became more and more intense, it was pitch black, the power was out, the ground started heaving, and then the entire roof curled up and vanished, ultimately leaving an intact, brick house (rare in the area) with a swampy interior of soaked clothing and wrecked possessions, including my old PC, which served as the village Internet cafe. Every coconut, mango and avocado tree – her retirement plan – flattened. No family hurt, but several neighbours dead. Some resentment that Samar and Leyte were getting more aid (Cebu escaped relatively lightly). I’m stumping up for a new roof – worth every penny for not having to personally go through anything so petrifying.

14 Responses to China Daily swallows Worst Excuse Ever – and more