The South China Morning Post celebrates its 110th anniversary today with a special supplement looking back on 1.1 centuries’ of Hong Kong history. It includes the editorial from the first edition to appear after the end of the Japanese occupation, a look back at the never-ending wrangling over democracy and similar interesting stuff. And, page after page, the pull-out unwittingly carries an alternative, parallel account of how the city came to be where it is today – in the form of the face-giving advertisements from big companies congratulating the paper on this noteworthy occasion. Of the 14, nine are from developers and landlords.

Meanwhile, the government produces its sorry and sad apologia about the ongoing HKTV licensing saga. It attempts to justify the Executive Council’s decision by amplifying its previously announced reasoning with more detail – detail that somehow manages not to add anything of interest. It also states that there is no need for the Legislative Council to invoke the Powers and Privileges Ordinance to force the government to reveal all, as this “will politicize the matter but offer no help in resolving it.” Unlike everyone just shutting up and forgetting the whole thing.

The first two Chief Executives – tycoon Tung and bureaucrat Tsang – both oversaw pretty blatant acts of official collusion with the family-run cartels. To take just a few examples, we saw curbs on land and housing supply to protect and push up developers’ profits, the granting of free or cut-rate development rights (Cyberport, Grand Promenade, at least one Urban Renewal Authority project) and, until recently, tolerance of consumer rip-offs like lying about apartment sizes. CY Leung had at least a partial claim to be different, but now, in the public eye, he has blown it. However technically or turgidly you put it, HKTV’s bid for a licence was rejected because, in effect, owner Ricky Wong doesn’t come from one of the half-dozen or so families for whom Hong Kong is run.

Yet CY will probably get through it. He has the robotic support of the Communist loyalists. The tycoons will grudgingly back him out of expedience, as will the broader pro-establishment business community whose retail, engineering and other interests gobble up the crumbs that fall out of the trough. Even the pro-democrats will fail to make the most of the collusion angle, and not just through incompetence; many of the Democratic and Civic Parties’ leaders’ legal practices – like the newspapers – depend to some degree on the big conglomerates for business. Our political system leaves the likes of Ricky Wong unrepresented. Given the lameness of our current politicians, and the constant whining about the shortage of talent in public affairs, could there be an opening for him somewhere?

At what point will the government, if it is to serve tycoons above all, step in to prevent property prices from falling too much? The SCMP notes that apartments are getting that teeny bit less 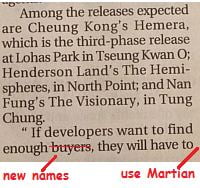 unaffordable, and specifically mentions three projects that, it happens, are noteworthy for the ineptness of their names. The problem is: they are running out of wacky things to call ugly high-rises. What is a hemera? It sounds like some sort of painful, bloody rupture in the abdomen. The homes, by the way, are not to be sniffed at: they’re near a huge landfill. As for The Hemispheres, the two in my brain produce different word-associations: ‘Christopher Columbus’, discoverer of a new one, and ‘boobs’ (or your favourite equivalent – word-associations are actually picture-associations, for me at least). This Henderson Land project is predictably promoted by the Standard, which raves at how the generous discounts will bring a 284-square-foot apartment to below HK$6 million. Small, crumb-eating loser-developer Nan Fung’s ‘Visionary’ might be better value, being in Tung Chung, a place so fun, exciting and convenient to live in that public housing units lie empty.

(Hemera is, of course, as we all know, the goddess of daytime – the period in our 24-hour cycle during which the project’s residents will be at work, paying off the mortgage and thus Li Ka-shing.)