Today’s mouth-froth du jour is brought to us by Hong Kong Stadium. The arrival in town of the 11 educationally subnormal men in shorts known collectively as Manchester United is supposedly an enormous privilege for the Big Lychee, on a par with the simultaneous presence of the US and Chinese Presidents, the Queen, Oprah Winfrey and the Pope to greet the second coming of Christ. What an international laughing stock we become, therefore, after the playing field is found to be sodden

with rain, and the English soccer stars risk slipping and splashing their delicate little legs with unsightly and malodorous mud.

The correct response by our senior officials would be a bemused shrug. “It’s summer. It rains here. Why didn’t these Manchester people look it up on Wikipedia or something and go somewhere else, like the Chilean desert? Meanwhile, we have more important things to do.” But no: even Chief Executive CY Leung himself visits the sporting facility ‘unannounced’ to examine the turf and perhaps, in the manner of a North Korean leader, gravely offer advice to the assembled grounds maintenance and soil science specialists. This is uncool.

And when we say ‘more important things to do’, this is no throwaway clichéd device to end the conversation. In the New Territories, an electrified mutant man-eating ruminant wreaks havoc. At first glance, this looks like just another ‘pitaya-growing Mainland goat-herders suffering mishaps on a Sheung Shui hillside’ story. But there is something far more profound about this. ‘Pitaya’ is a fancy word for the exotic-looking but tasteless dragonfruit; goat-meat, meanwhile has the flavour lamb would have if it grazed on plastic bags – fine by some of us, but not generally acceptable to the fastidious Cantonese palate. In short, what we have here is a shocking discovery. We are constantly told that Hong Kong has a shortage of land; now we have evidence that perhaps it actually has too much.

Meanwhile, at the University of Melbourne, a social researcher is, in my humble opinion, gambling her doctorate on a losing bet. One day, they will have to stop handing out PhDs: scientists will sort out dark matter and the last remaining mysteries and declare the body of human knowledge complete. But until then, graduate students must find ever more obscure topics to explore. For Cui Tai, more than averagely interesting contributor to the South China Morning Post’s op-ed page today, that is ‘problematic Chinese-Australian social interactions at work’. Some highlights…

…a study of the social experience of recent Chinese immigrants in Australia … found that their biggest barrier to communication is not language or knowledge, but the ability to make small talk.

The experience of 25-year-old Fei … is typical. Every time the company holds a social function, he’s reluctant to join, he says. “Australians can walk into a party where they know no one and straight away they are able to talk with anyone, but we Chinese tend to hang on to one person, usually also Chinese or Asian, and stick to that person throughout. It feels awkward,” he says.

And for 30-year-old Bai, who is married to an Australian husband and works in the chemical industry, even responding to “how are you” throughout the day proves stressful.

As anthropologist Bronislaw Malinowski pointed out, small talk allows people to show friendliness, bond, and maintain a good relationship with others. Effective small talk in the workplace may even open up career opportunities. Yet why do these young and competent Chinese professionals find themselves lost in these situations?

The fact is, for many Chinese professionals, engaging in small talk is a new social experience. They lack ready-to-use responses to deal with fast-paced social exchanges, and struggle to get the timing, content, placing and tone “right”.

… individuals in the Anglo-Australian context are more loosely connected and interact on a basis of equality. Small talk suits this looseness and equality and allows people to achieve a level of surface friendliness across different relationships.

So Australians can make friendly, even personal small talk to people they don’t know well, but for Chinese, these friendly overtures belong in no recognisable relationship category and totally blur their boundaries of interpersonal behaviour. Growing up not having much practice in this pattern of interaction, when bombarded by small talk in the new environment, we simply do not possess sufficient skills to deal with it.

This is full of glaring errors. You don’t have to be a Chinese migrant in Australia to ‘feel awkward’ at parties; nor do you have anything to apologize for. Many of us find talking about nothing with strangers to be so tiresome as to be discomfiting; it is the people who enjoy babbling away endlessly and vacuously who should be saying sorry. Rather than say ‘engaging in small talk is a new social experience’, Ms Cui should say ‘listening to bores talking crap is a pain you have to get used to’.

Maybe, as she suggests, Chinese culture insulates people who enjoy discussing things and ideas from people who just yack and yack and yack because it is uptight and hierarchical. It doesn’t solve the basic problem, which it goes without saying is hardly confined to Oz. If she could work out why many people worldwide insist on talking even when there is nothing to say – and find a (painless, if possible) cure – she would truly be worthy of a Nobel Prize.

Tycoon Li Ka-shing deserves a pat on the back in this respect. The property mogul will not indulge in idle chitchat with the press after announcing his companies’ interim results on Thursday. Some may see this as poor corporate communications practice, but not in his case. Traditionally, the local media ask Li such mind-bogglingly stupid questions on these occasions, and take his non-responses so seriously, that we should be grateful. If only others followed his example. (If Cui Tai thinks Chinese are reserved and status-conscious, she obviously hasn’t seen the yapping, leaping human dingo-puppies that are Hong Kong reporters in swarm.) 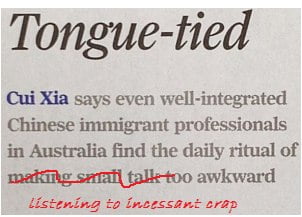