Parking in the living room with Cambodia’s middle class (2)

Although this little middle-class neighbourhood has one in every living room, Cambodia as a whole has only one car for every 32 people. The country is at the moped stage of development. Little motor bikes can carry a surprisingly sizable family, or they can be hooked up to a trailer and serve as a pickup. They represent an important economic sector in their own right, supporting thousands of people who sell fuel from old Coke bottles by the roadside, and who lovingly wash, shampoo and massage the machines at countless maintenance shops. As tuk-tuks or as simple two-wheelers, they serve as taxis – essential in a city with no urban bus system, let alone metro.

The rich elite and the international aid community, who can’t perform their humanitarian mission without air-conditioning and stereo, drive monstrous black 4-by-4s. The stupidest thing planners (if any) could do at this stage is to think “those things are cool and the way of the future, so let’s build the city around them.” So that, of course, is what they are doing. Phnom Penh’s third flyover is currently under construction, complete with clover-leaf ramps looping round it. The city will never be quite like Bangkok, Manila or Jakarta (each of which has a bigger population than the whole Kingdom of Cambodia), but officials seem to be determined to make the same mistakes anyway and ignore this never-to-be-repeated opportunity to implement some sort of trendy electric buses/road pricing system before descending into standard Southeast Asian gridlock.

Not that my hosts see it that way. They are actually proud of the new flyover – as they are of the small number of skyscrapers – because it will look so modern. They’ll be able to look snotty, uppity Thais in the eye, and maybe feel better about the Vietnamese taking over all the coffee shops and being registered as voters to help the ruling party. This makes me wonder what other evils of the 21st Century these poor people, with their tragic history, misguidedly imagine to be desirable. Will they, for example, ask to be taken to a tacky, plastic, pseudo-American pizza place for the meal I will treat them to before I leave?

I know the answer because they have already told me and are very excited, because such a dining experience is a really high-class thing to do. For a short time we hang out at a function in the presence of a striking movie star with a big fan and even bigger bouffant hairdo, waiting for Princess Norodom to make an appearance. My hosts are very eager for me to come along, perhaps to prove (not that I doubted it) their social standing. Being irritatingly hard to impress – my biggest vice – I grow tired of waiting for Her Royal Highness and we head off to the Pizza Company, a franchise linked to the Swensens ice cream chain, overlooking the river.

Apart from a few expats with kids, the customers are nearly all young, aspiring, middle-class, urban Cambodians. One group have brought an aging grandmother along in her tribal dress and turban. She looks bewildered enough even before seeing the menu. This offers a choice of three crusts: regular thin; thick with a tube around the perimeter containing melted cheese (well, ‘cheese’, at least); and thick with tubes around the perimeter containing sausage (‘sausage’ – scroll down for intimate and detailed illustration). I make the barely forgivable faux pas of choosing the plain one. Tom yum gung flavour. Pol Pot tried to eradicate traditional Khmer culture; now it’s the Pizza Company’s turn. Outside, lizards scramble over the brightly lit Dairy Queen sign in an attempt to add a bit of local colour to the creeping homogenous consumerist globalization.

Time for one last evening stroll along the waterfront. This is the equivalent of walking along the harbour (if you could) in Central, except the bank on the other side is barely developed, with more trees and fields than buildings. Among the families, couples, ragamuffins and tourists, I can’t help noticing one or two unkempt and frankly putrid-looking 60-something white guys sitting and watching little kids playing on the swings. At least, I think that’s what I’m seeing. As with the colour divide between semi-Chinese light-skinned wealthy and native dark-skinned poor, everyone else seems oblivious to it.

And so we bid a fond farewell to plucky little Cambodia, with its 10% annual GDP growth, crumbling colonial architecture, corrupt government half-controlled from Beijing, children picking through piles of trash, the heart-warming sight (as in Vietnam) of French people having to speak English, and a small but growing population of ambitious and bright folk with enough disposable income to plan what electronic appliance to buy next. Another bit of Southeast Asia succumbs to brands, processed cheese and traffic jams. 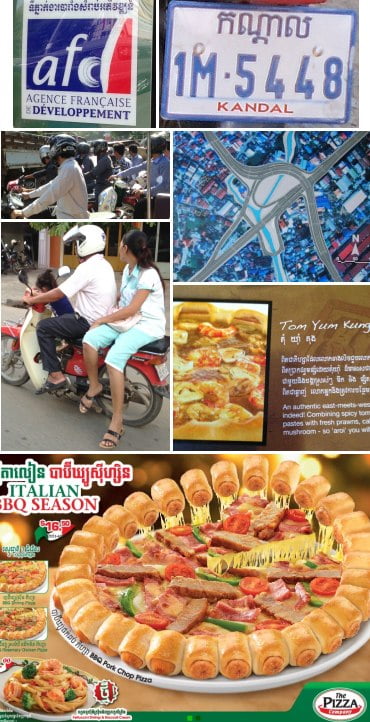