At last – something more depressing than Tony Chan’s wife! 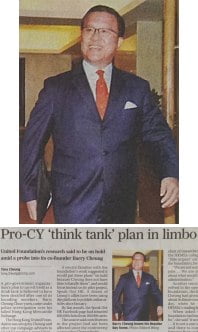 An irritatingly jovial-looking Barry Cheung strides purposefully onto the front pages, seemingly without a care in the world. It is almost as if, following the demise of his HK Mercantile Exchange, defenestration from the Executive Council, the Urban Renewal Authority and the boards of AIA and Rusal has given him a new lease on life. It is almost as if being under police investigation in connection with HKMEx is a thrill and a delight – perhaps even (courtesy of today’s Standard’s ‘Character Builder’ column) some sort of ‘fish-water joy’…

Of course it could be that, being the only non-Japanese man in the world who thinks bold blue suits are cool, Barry is delusional and doesn’t realize that he could be facing legal issues of Dzhokhar Tsarnaev- or Michael Adebolajo-type proportions. 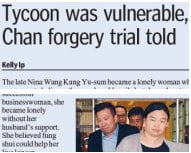 Alternatively, mindful of the fact that if he were Japanese he would have disemboweled himself sometime late last week, he is playing it as cynical as he can, calculating that even the most egregious possible criminal charges can be grinned away, a la Nina Wang beau Tony Chan (last seen looking a tad morose, even by his wife’s gloomy standards).

Among the many pastimes Barry is abandoning is the Hong Kong United Foundation. All the signs are that this self-described ‘think-tank’ was to be clumsily modeled on the Bauhinia Foundation, the umbrella organization for the shoe-shiners and other hangers-on who gathered around former Chief Executive Donald Tsang and – if we can be allowed to break the rule about using too many adjectives – his nauseating and smug entourage of arrogant, talentless bureaucrats and incessantly grasping tycoons.

Why would Chief Executive CY Leung and his sadly sparse and not wholly impressive assortment of acolytes want to emulate Sir Bow-Tie’s pretentious and self-serving PR outfit? (It’s still in existence, wetting itself, as ever, about the dreaded ‘aging population’ crisis.) The answer, so far as we can see, is a paucity of imagination. The last administration had a quasi-independent ‘think-tank’ to push its favourite policies, so we should do the same. And it should be run by a self-

satisfied businessman-cum-bureaucrat who later goes on to get himself into legal trouble (Anthony Wu in the Bauhinia Foundation’s case).

With luck, we will be spared the Hong Kong United Foundation. However, the South China Morning Post reports that Barry will be focusing on a sub-project of the HKUF: Speak Out HK, a website aimed at countering all those negative vibes coming from dissident elements among politicians, the press, activists, university students, taxi drivers, labour unions, educators, housewives, small entrepreneurs, the elderly, school kids, the middle class, employees at 7-Eleven, small furry animals and on and on.

It is hard to see what Speak Out HK is designed to achieve. What you get is reminders of the great job the Mainland is doing about the virus du jour, some anti-Long Hair cartoons and a series of articles baldly stating the opposite of what everyone knows is more-or-less true. It is unfair to pick on the Secretary for Security for saying that women shouldn’t get drunk in order to avoid rape! The filibustering in the Legislative Council is terrible and so are the pro-dems who sit by and do nothing! People who think there is anything wrong with the Executive Council don’t understand how it works! The filibustering in LegCo wastes public money and harms us all!

This is genuinely saddening. It’s like the editorials in China Daily but without the wit and subtlety. Although you can’t turn black into white, it would be possible to craft less strident, more thoughtful, at least semi-convincing excuses for the administration’s problems, if someone really wanted to. But you might as well post North Korean press releases for all the persuasiveness of this stuff.

Obviously, a bunch of web designers and hack writers are making some money out of producing the content, and are no doubt sniggering away as they cash their cheques. Good for them. Presumably, some donors or aides of CY imagine, or at least pretend to imagine, that millions of people who think Hong Kong can and should be better-run will flock to this website, read it, and conclude that in fact government critics are wrong and everything is indeed fantastic.

Does anyone up there in CY-Land perceive that this is just a private-sector version of the ridiculous Hong Kong Our Home campaign, and that ultimately any government of a free people has two choices: deliver policies that make life better not worse, or get pissed on. It’s that simple. Maybe Barry now has, or will have, time to ponder it.

Sudden thought: Positive Energy Day was last Sunday and I was too busy checking out the giant rubber duck. What happened? Was anyone hurt? 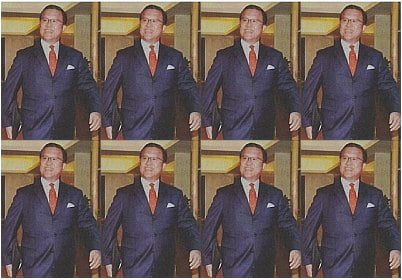 Click to hear none other than the late great Frank Zappa directly addressing Mr Cheung!

9 Responses to At last – something more depressing than Tony Chan’s wife!