‘He has erected a multitude of New Offices’

In his policy address last week, Hong Kong Chief Executive CY Leung proposed setting up over a dozen committees/boards/councils to investigate/tackle/whatever a wide range of challenges/issues/stuff. It is probably misleading to lump them all together; some have specific questions to answer (like how to scrap the fishing industry now the fish are all used up), while others have vaguer aims (like how to develop an industry based on unscientific folk quack remedies otherwise known as traditional medicine). The party line on why we need all these bodies is that conflicting interests and the need for due bureaucratic process make it impossible for the administration to ram new policies through Right Now.

Former Central Policy Unit boss Lau Siu-kai comes up with another explanation, or at least a more candid version of the official one: the appointees are intended as a sort of counterweight against the civil servants resisting change or (I’m guessing) trying to clog everything up with red tape to justify their existence. Margaret Thatcher said “consensus is an absence of leadership.” CY’s predecessor Donald Tsang said, in effect, “consensus is something we can’t take any decisions without, and thus the perfect reason to make no decisions.” CY’s definition would be something like, “consensus is something I must try and force bureaucrats and vested interests to accept, but God knows how.”

The new committee everyone is talking about is the Financial Services Development Council. It initially attracted attention because it was packed with Mainlanders (well, OK, a handful of them), mostly princelings (well, one – Levin Zhu, son of estimable reformist former Premier Zhu Rongji). The body’s contingent of Westerners went largely unremarked.

It raised more eyebrows as its Chairman, former-lots-of-things Laura Cha explained the Council’s form and function in a variety of ways, starting with ones that were plain wrong, then moving on to ones that were sort of half-right, before finally coming up with the correct version: it is a public entity, not-for-profit, and will not accept donations or act as a sovereign fund.

As for what it will do, it sounds vague, but we can sort of guess. It will, with the help of its well-connected native-Mandarin talent, lobby Beijing for pathetic favours to give Hong Kong an edge in listing Mainland companies, developing the much-vaunted but rarely seen ‘Yuan business’ and what we might euphemistically call managing Mainland funds. It might do a bit of think-tank-type research, or maybe not. It might go to places like Dubai and urge the people there to partake in the aforementioned highly exciting Yuan business. Except HK Monetary Authority boss Norman Chan – a stalwart of the Donald Tsang-tycoon-bureaucracy nexus that opposed CY Leung – has beaten them to it.

Frankly, the other committees, like the ones on the harbor and land supply, will probably be far more interesting.

Meanwhile, over in sunny Mui Wo, another famous committee, the South Lantau Gwailo Gossip Gestapo, is scratching its head over the identity of the cunning foreigner who (allegedly, according to a banner recently erected on a railing) cheated workers of their ‘blood-sweat money’. Embarrassing, at best. At worst – let’s not think about it… 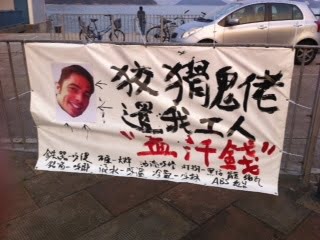 Click - and you really must - to hear Red Baraat’s ‘Chaal Baby’!

13 Responses to ‘He has erected a multitude of New Offices’