Wed, 29 Nov
The Big Boss drags me into a meeting with a fellow tycoon – ‘Dr’ Tai.  The proud owner of an honorary doctorate from a little heard-of university in a distant land, Tai straddles the generations of the current and former Chairman of S-Meg Holdings.  “My father always told me to be nice to him,” mutters our illustrious leader, “but they’re nothing now.”  The Tai family made its fortune trading durians back in the 1950s, then lost much of it by going into property at the peak of the market in the ‘70s.  The fading company is ripe for asset stripping, but face overrides commercial sense in these circles.  “This is a bit embarrassing,” the Big Boss whispers before we enter the reception room where the gentleman is waiting.  “Hopefully, when he sees you he’ll go away.”

Unfortunately, Dr Tai is unfazed by the appearance of S-Meg Holdings’ most exotic staff member and eagerly gets down to business.  He wants his son to be made a Justice of the Peace.  Many of his friends’ sons sport a ‘JP’ tag after their name, and he thinks it’s unfair that his own boy – now in his 40s – should be left out.  He reminds us that he was one of the first members of the business community to start saying rude things about Chris Patten in the early 1990s, and the family donated generous sums for Mainland flood victims a few years ago.   We sit and nod politely.  The Big Boss says he will “speak to Donald about it.”  You can tell you’ve been in Hong Kong too long when you find nothing remotely strange about a man feeling that his loyalty to the Communist Party and the Chinese motherland should be rewarded by the symbolic appointment of his first-born to an English public office dating back to 1361.

TO ATONE for their spelling mistake in a headline last Saturday, the South China Morning Post today comes up with Most Deadpan Photo Caption of the Week… 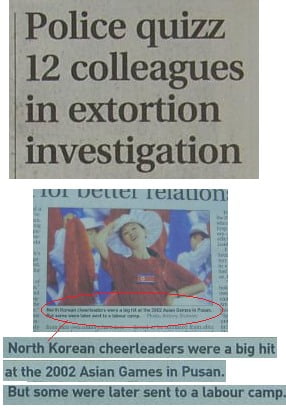 Thurs, 30 Nov
So joyous is the mood on the Mid-Levels Escalator this morning that everyone bursts into song.  “Here in Hong Kong we are one big family,” we chant.  “And we’re proud of this place we all call home.”  It was the unofficial Big Lychee national anthem back in the days when the city was confident, happy and prosperous, before it became self-doubting, miserable and prosperous.  It was a rousing tune – an anti-littering ditty that stirred the heart of free men and women of all colours and creeds, rejoicing in their good fortune to live in a land of liberty, where the Government’s idea of intrusion into people’s lives was to urge them to place their Hello Kitty ice cream wrappers in the garbage bins provided at 10-foot intervals the length and breadth of our colonial paradise.  Like the people, the bins were rugged and sturdy – crafted of steel and painted a bold and defiant orange.  Today, we put our used tissues and half-eaten quarter-pounders into effete, cheap, plastic purple receptacles – a reflection of the pitiful, childlike weakness and meek subjection to authority to which we have been reduced.

In the old days, you could hire anyone you wanted and be open about it.  You could announce, “I want a clerk who is young, able-bodied, female and Chinese,” and fire her the second she got married.  You could say, “I want to rent my property out, but not to an Indian because they will cook curry,” and get a blond-haired, blue-eyed British tenant who cooked curry.  There was an unwritten rule.  No-one started up hate or supremacist groups.  No-one got lynched, beaten up or spat on.  In return, we were all free to loathe each other in peace and harmony.  It was too good to last.  The great libertarian experiment succumbed to lawyers, activists, do-gooders and bureaucrats.

Being civilized and progressive, we will now be able to sue each other for race discrimination, except under circumstances carefully chosen to avoid any serious inconvenience to decent people with perfectly understandable reasons for favouring or rejecting persons of one particular hue or another.  Indeed, I already feel that a trip to the Equal Opportunities Commission might be in order.  Under the proposed law (Urdu version, Nepali version, Bahasa Indonesia version and Thai version coming soon), racial harassment and vilification will be an offence.  Is this not what I face in my own workplace?  Barely a day goes by when I do not hear some snide remark about the Company Gwailo – an island of Anglo-Saxon DNA in an ocean of the seed of the dragon – and the way he is allowed to turn up late, go home early, skip the excruciating annual dinner, not wear the puce and lime-green company tie on Mondays, Wednesdays and Fridays, and enjoy all sorts of other privileges and immunities.  Just because he is white, reports directly to the Big Boss, and the Human Resources Manager is petrified of him.  The next expression of hostility or intolerance about this situation – Ms Fang the Hunter Killer Secretary is a frequent complainant – and I will see to it that my persecutors are struck with the full might of justice. 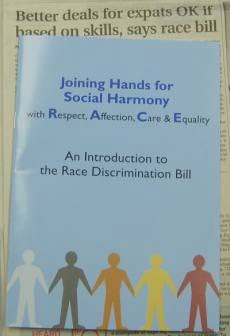