Government and pro-dems show they deserve each other

Oh joy! Just as we thought the passing of Golden Week and the clampdown on Shenzhen parallel traders meant our Mainlander problems were over for a while… it’s Invasion of the Baby Locusts at Sheung Shui kindergartens. Remember all those Mainland mothers in the maternity wards? They’re back, and they want your toddler’s pre-school place. This isn’t going to be pretty.

On top of that, welcome to inflationary austerity…

Indeed, through a policy of limiting land supply, some would argue [the Hong Kong government] has refined this process of inflationary wealth confiscation to an art form.

It directly raises large amounts of revenue from land sales as citizens are made to pay an ever-greater proportion of their income on the basic necessity of shelter. Hence, you get a rich government alongside poor citizens.

Some of those citizens are also elderly. And we are currently entertained by the sight of the pro-democracy camp in the Legislative Council trying to defeat a government measure to increase handouts to them. The government is valiantly fighting back and essentially daring the warriors for truth and justice to deny our less well-off senior citizens some badly needed extra cash.

The government, in effect, proposes doubling the universal Old Age Allowance (HK$1,000-a-month ‘fruit money’) for the elderly who come below a certain level of income and assets but don’t get CSSA – the basic welfare safety net. Technically, it will be a different benefit altogether, called Old Age Living Allowance. The opposition are demanding that the new handout also be universal. Part of the reason is that many ‘fruit money’ recipients are so poor that they should be on CSSA, but they don’t apply because the government forces them (more 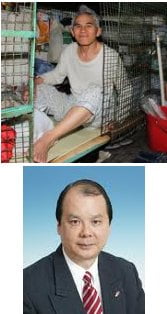 or less) as part of the application process to denounce their offspring as worthless, heartless scumbags who are letting their old parents starve like Westerners do.

The whole retirement/pension system needs reform, and Chief Executive CY Leung’s administration may actually address it a few years down the road. In the meantime, it’s patch-and-mend, with the pro-dems threatening to prevent even that. (In all fairness, some pan-dems who realise the confrontation is actually about deserving old folk who really could use the extra cash are tempted to support the government).

It would be nice to see the opposition question Secretary for Labour and Welfare Matthew Cheung’s forecasts of how Hong Kong will fall to fiscal ruin unless the new allowance is means-tested. Because of the dreaded ‘aging population’, he argues, the new allowance’s cost will balloon even with means-testing to almost HK$10 billion a year by 2022-23 (there is even a document floating around showing a scary cost projection out to 2041). The freedom fighters among our legislators could – but of course won’t – counter this in several ways.

First, they could compare the burden on taxpayers with the cost of civil service pensions, already running in the hundreds of billions a year thanks to the public sector’s bloated salaries (to which the pensions are directly tied). Trim that, and we can all have double ‘fruit money’.

Second, they could ask why Cheung and his fellow ministers assume so many of our retirees in one, two, etc decades’ time will still be the illiterate and unskilled sort of people who comprise today’s cohort of impoverished 70/80-somethings, born and raised in times of war and upheaval. If the government did its job properly and ensured that we had an educated and productive workforce, no-one would need any welfare in retirement by the 2030s.

Third, our fearless radicals could refer to the Craig Stephens quote at the top about how Hong Kong citizens pass on too much wealth to the property tycoons and the government via overpriced housing. And they could ask whether this has something to do with people’s inability to save enough to support themselves in old age. And then they could ask Matthew Cheung why he needs eight properties in Hong Kong.

Exciting penis-biting poultry update: my Mainland art advisor informs me that yesterday’s intriguing painting is entitled ‘ai-ya’ meaning ‘ai-duck’ (presumably 哎鴨), pronounced the same as ‘aiyaah’ (哎呀), which is what you scream if a bird mercilessly savages you in the manner portrayed. The artist is one Zhao Xiaoguang. He won a prize in a national paintings-by-farmers competition, following which he was later found to be a government official (albeit in a rural area). Fake milk powder, fake dumplings, fake farmers-who-paint. The (presumably genuine) work sold at auction for a very reasonable RMB20,000 in 2007. And yes, there’s a link. Disappointingly, his other works are less… memorable. 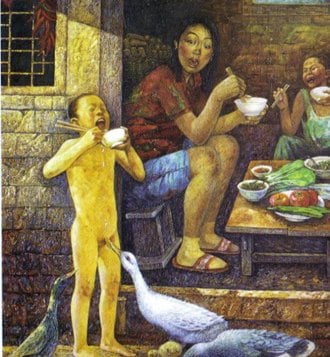 Click to hear ‘Things are Going to Get Better’ by the Small Faces!