According to the Standard, the focus in China is shifting from politics to the economy. Reuters, on the other hand, says politics is the priority for China as the economy slows. You be the judge. In Hong Kong, with Legislative Council elections looming, we all know where the focus is. Yesterday’s South China Morning Post reported the curious story of West Kowloon independent candidate Lam Yi-lai, who might have the Equal Opportunities Commission chasing her for publicizing a policy that ‘could be’ racist. To add to the fun, the government is also somehow culpable…

A candidate for next month’s Legislative Council election is at the centre of a racism row over her campaign call for Hong Kong’s 300,000 foreign domestic helpers to be denied traditional Chinese public holidays.

The government could also be in hot water for allowing the production of election material that may be in breach of the city’s racial discrimination laws, says the Equal Opportunities Commission.

Lam Yi-lai, an independent candidate standing in the Kowloon West constituency, was cautioned by the commission after minority-rights group Unison filed a complaint last week.

The commission says Lam and the government could be in breach of the Race Discrimination Ordinance for distributing offensive election pamphlets.

The pamphlets suggest that for “Hongkongers’ benefit and family enjoyment”, domestic helpers should not be given days off for the Lunar New Year, Ching Ming festival, Mid-Autumn Festival and Chung Yeung festival because they are not holidays meaningful to “foreigners”.

A commission spokesman said: “The EOC will write to the candidate to warn her about the potential breach of the Race Discrimination Ordinance, as her idea of depriving non-Chinese domestic helpers of their rights could be racially discriminatory.

Unison director Fermi Wong Wai-fun says that by Lam’s reasoning “Chinese [Hongkongers] should not enjoy Easter and Christmas holidays either”.

A spokesman for Lam says the government’s insistence that traditional Chinese public holidays are statutory holidays for foreign domestic workers is causing stress for local families.

“These are the times when their employers need them the most,” he said.

If Lam’s name is vaguely familiar, it could because of her record of accusing men of taking liberties with her mammary glands. First it was legislator Paul Tse in a radio studio. Then it was a residential estate security guard.  The latter complaint earned her a two-month jail sentence, which was suspended, for making a false police report. A suspended sentence was also, of course, handed out to disgraced Chongqing party chief Bo Xilai’s wife, Gu Kailai. And Paul Tse, of course, is the celebrity lawyer and nude photo model associated with ex-convict and current Legco candidate Pamela Pak/Peck.

If you think the links between such grotesque people are cosmic, we’ve only just started. Lam used to be a director of the Po Leung Kuk, the venerable children’s charity. This does not mean she was managing orphanages; she is one of those second-tier ‘elite’ socialites who enormously value the traditional prestige attached to honorary posts with old local charities. Such bodies’ members’ grotesquery is as curiously obvious as the institutions’ missions are noble.

A glance at the current line-up at the Po Leung Kuk shows casino king Stanley Ho’s fourth wife and a daughter born to – if I recall – his second one; these add much of the serious class to the Kuk’s board. Most of the other members are closer to Lam’s social station, with barely a Justice of the Peace or Bronze Bauhinia Star to be seen. One member seems to belong to the Order of St Joseph, which you don’t see every day; this brings to mind our old friend Duke Dr Raymond Lee of the Tung Wah Hospital board. (If we absolutely must gawk, the most noteworthy Po Leung Kuk luminaries in terms of raising eyebrows and questions are surely the guy called Human and the almost-guy called Miss Catherine, both understandably tucked discreetly away on the bottom row.)

Lam’s election proposal to abolish Chinese holidays for maids may look like bigoted populism of the sort that undeniably appeals to a strand of the Hong Kong electorate – typically people who can’t afford domestic help and have no-one but dusky Southeast Asian menials to look down upon. Yet our trendy and liberal younger generation, so far as it lives and votes in West Kowloon, and non-Chinese will probably find the idea mean-spirited. So bang goes the youth and ethnic votes for Lam.

But that’s not all. She also proposes criminalization of men who keep mistresses on the Mainland. There are quite a few of these cads around, and quite a few men who don’t rule out the idea in principle, so that loses the candidate a fair bit of support among the male half of the electorate. To compensate, she might attract straight-laced, puritanical women voters. (And any civil servants who are looking for a really tough policy-implementation challenge.)

But she will lose them almost immediately when they see the third leg of her policy platform: legalization of gay marriage. There are people lobbying for legal status for same-sex unions in Hong Kong, so she could attract support from them, especially if they are racist and prudish.

But still: triangulate that. It’s an odd mix of positions. Then again – odd candidate. Not suitable so much for a protest vote as a semi-suicidal-with-despair one. 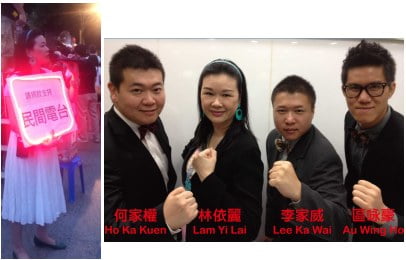 14 Responses to Meet the candidate