The South China Morning Post reports that 51% of Hong Kong students think their city was more democratic under the British; 40% of their counterparts in ex-Portuguese Macau agree, as do – perhaps most startling of all – a quarter of Mainlanders.

For a brief few years under Governor Chris Patten, Hong Kong was technically more democratic than it is today, thanks to his reforms of the voting system for the Legislative Council, which gave everyone a vote in a functional as well as geographical constituency. Those reforms were reversed at the stroke of midnight on July 1, 1997. But this was marginal, at best: the citizenry then, as now, had no official role in the selection of the government, which has always been decided in the sovereign power’s capital.

You could argue that Hong Kong became more democratic in practice in 2003-05 when the population forced failed Chief Executive Tung Chee-hwa out of office. This principle was formalized in 2011 when Beijing specified that whoever took power the following year would have to be, among other things, acceptable to the people of the city. Amazingly, the Chinese government kept its word when at the last minute it dumped Henry Tang and picked CY Leung over the heads of the local establishment. There was never a de facto popular veto over choice of British governor.

Do these 51% of local students genuinely believe what they are saying? It’s quite possible. They would have been brought up by people who came of age in the booming 70s and 80s and went on to rail against Tung soon after the handover. To their parents, things would have seemed better than they are today. Their grandparents, on the other hand, might have less positive memories from earlier times.

The survey’s organizers, which are Beijing-friendly bodies, put it down to ignorance. But it’s also possible that some students, ignorant or not, saw the question in the survey as an opportunity to register a protest against the current regime. Certainly that seems to be the case with the quite jarring phenomenon of protestors too young to be nostalgic for the pre-1997 era carrying the colonial Hong Kong flag and, in one case (below), a picture of the Queen. While these demonstrators may savour the shock value of these props, they do not seem to realize just how provocative the symbolism is. To Beijing officials and doctrinaire patriots here in Hong Kong, this is little short of treachery or blasphemy. Indeed, it is almost to the credit of Communist loyalists’ patience and sophistication that they have not utterly freaked out over the flag thing.

Perhaps they are too busy getting incensed by the partial collapse of plans to launch ‘national education’ in primary schools. Catholic authorities have joined many other groups – covering up to 40% of schools – in putting off the new subject for a year. All because, hilariously, a pro-Beijing group produced an optional textbook that rather overdid the patriotic bias. Even the usually nationalist, mouth-frothing Global Times, quotes a Mainland academic as saying that the book “…is not so objective… and mostly focuses on the bright side.”

Meanwhile, new Secretary for Justice Rimsky Yuen says that if Chief Executive CY Leung asks him to obey the Basic Law and implement Article 23 to introduce national security laws, “I will tell him no.” This was, as Tung Chee-hwa patiently explained to us all those years ago, a ‘sacred duty’.

All in all, China’s control of Hong Kong stops abruptly at the city’s hearts and minds. One reason is that China’s paranoid government appoints Hong Kong’s leaders from a small pool of trustworthy people. They goof up, which provokes popular discontent with Beijing, and thus the cause also becomes the effect. Another reason, with which we can declare the weekend open, is ancient wisdom dating back thousands of years: “If you wish to be loved, you must first be loveable.” 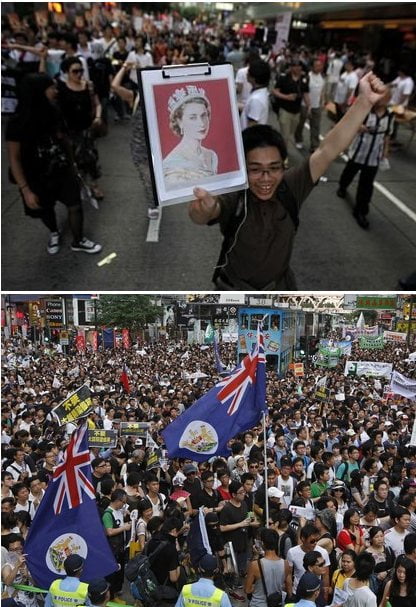