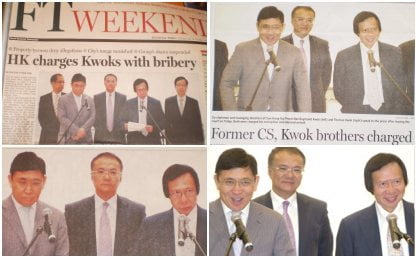 Saturday’s Financial Times and China Daily both featured photos of a Friday press conference given by Raymond and Thomas Kwok, the Sun Hung Kai Property bosses arrested by the Independent Commission Against Corruption. In the FT, they are the most depressingly, tragically grief-stricken creatures on Earth, looking so morose – almost suicidal – that I had to push my bowl of Foreign Correspondents Club congee away to protect it from the floods of tears streaming down my face. In China Daily, on the other hand, they appear gloriously overjoyed, every bit as deliriously happy as they would be if the government gave them sole rights to develop the whole of Lantau into luxury residential sprawl for Mainlanders.

Some experts quoted in the media say that the court case and appeals could drag on for years. The Standard reports that the brothers could be budgeting HK$100 million for legal fees, and have already retained one Lawrence Lok for three years at HK$30 million. HK$30 million per year, that is. (Apparently, “…renowned barristers can charge between HK$10,000 and HK$50,000 an hour just to study documents.” Sounds like my kind of job – though some barristers I’ve met would drool over 50 grand a month.)

Obviously Barrister Lok’s fee is chicken-feed to the Kwoks, but even so, to my nasty, sordid little mind, such sums and timescales suggest that the pair are indeed conniving, cheating rascals, and know it. As Article 87 of the Basic Law makes clear, it’s the prosecution’s job to prove the accused guilty, and truly innocent parties surely shouldn’t need to spend such astronomical resources in their defence. Even if they do have unnervingly shifty-looking eyes and come from a dysfunctional family.

If the brothers do end up in prison, they might be interested to note that the cells really are the 60-90 square feet that are advertised – none of the supposed floor area is in fact in marble foyers or swimming pools. Other inmates will no doubt be intrigued to find out what Thomas, after his trip to the barber, has been hiding all these years under his repellently styled long hair. The rumour is that he is cursed with some sort of hideous deformity to one of his ears. He is the born-again Christian, and will no doubt use time behind bars as an opportunity to contemplate and of course spread the Gospel among his fellow convicts. Raymond, I am reliably informed, is the one with such an explosive, high-decibel, profanity-laden temper that he has to take anger-management courses. Such people tend to have a hard time adjusting to life incarcerated among violent psychopaths, triad hitmen and disciplinarian correctional staff.

Estranged third brother Walter has not been charged as yet. Kidnappers once held him in a box for a week, while his loving family (so the story goes) prudently

haggled over the ransom. Relations with his kin were never quite the same, and they ejected him from the company over an extra-marital but intra-company affair. Although understandably affected by such traumas, he is the normal one and would make by far the most preferable cell-mate. For a while, at least; suspicious gossips wonder whether it is he who informed on his brothers (who wouldn’t?), and we all know what happens to ‘rats’ and ‘snitches’ in the penitentiary.

Will the matriarch visit them?

But we are running ahead of ourselves: there are many years, many millions in fees and many documents to study at HK$50,000 an hour to go.

Shorter term: today is the day Chief Executive CY Leung appears in the Legislative Council. Which lawmaker will ask the most impertinent, the most trivial, and the least original questions? The competition will be stiff, and I may be able to help.

My domestic helper pointed to a picture of CY in the newspaper the other day and said, finger trembling with rage, “He is a terminaTORRRR!” One of her friends is a maid for a family near the Leungs on the Peak, and apparently it is common knowledge among the Filipino amahs in the neighbourhood that domestic helpers in Trellis Mansion do not last long. They probably do not end up six feet under some illicit structure in the garden; they have their contracts terminated – hence the dread, lethal-sounding expression. Serial terminators are usually wives who curiously can’t get on with any maid, and so fire and hire them every few months, causing financial and visa nightmares for the ex-servants. Word of such toxic employers spreads fast. An ideal subject for an embarrassing and personal question at this afternoon’s Legco appearance, surely?

Click to hear ‘Cash on the Barrelhead’ by the Louvin Brothers!