Today’s morning news on the radio led with the revelation that an individual who is or has been a member of the Communist Party is busy subverting Hong Kong’s freedoms from within Chief Executive-elect CY Leung’s office. The Labour Party’s Lee Cheuk-yan warned that ‘One Country Two Systems’ is in danger. Someone from the Civic Party said something that was probably similar (I was brushing my teeth). Then, someone from a public-sector union intoned that the young woman’s appointment would damage civil service morale. All of a sudden, I felt strangely calm and relaxed about it all.

What, apart from her Pinyin-ized name and northern facial curves, is so offensive about Chen Ran? Is it the fact that back home as a student she was in the Communist Youth League? As the Standard’s Mary Ma column points out, members are hardly unusual in Mainland schools. Wikipedia says there were 73 million of them in 2007; add former members, and they must number in the hundreds of millions. They’re everywhere.

Or could it be that she took her government position on a non-civil service contract before being eligible – by a few months – for permanent residency of the Big Lychee? This required discretionary approval by the Immigration Department. It is not unprecedented, but it suggests that she has unique skills impossible to find locally, which does not seem to be the case.

Or – and this looks like it could be her or CY’s biggest crime – is it that a non-civil servant has taken a position that could have been filled by a full-time, permanent bureaucrat? Perhaps civil servants on bloated permanent packages have their delicate morale harmed at the sight of an outsider being parachuted in on a mere HK$22,000 a month. Officially, the fear is that Chen, who previously worked on CY’s campaign, will not be politically neutral while performing her public duties as a CY ‘programme officer’. The chances are that Leung put her in the job for convenience, and it could be argued that the rules on bringing your own help are too strict (remember the fuss when Tung Chee-hwa took his personal driver with him into office?). However, the case points to possible problems ahead.

When businesswoman Sarah Liao Sau-tung served as Environment and Transport Minister in the mid-2000s, she was surprised to find that, unlike in the private sector, she could not choose her own senior officials, let alone get rid of them if necessary. This mattered: when she raised the issue of road pricing to help clean up the air, one of her top bureaucrats (she later revealed) was determined that it wouldn’t happen, and it didn’t. We are living with the results today. CY Leung knows about this problem (not unique to Hong Kong) with civil servants. Former Chief Secretary and arch-bureaucrat Anson Chan knows that CY knows, as she makes clear in today’s South China Morning Post, sternly advising him to mollycoddle administrative officers and not exercise ‘top down’ leadership. The property hegemony is not the only one CY faces.

The SCMP tucks the Communist Youth League infiltrator story away in its City section, and right at the very bottom of the piece, it tells us that Chen was once an intern at… the SCMP. We can safely conclude that the young lady is harmless. 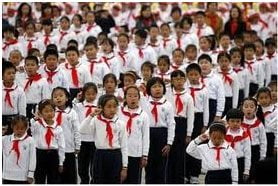