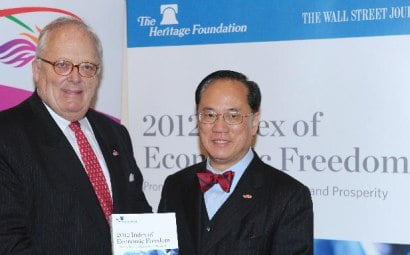 Hong Kong’s hearts have been gushing with pride as that time of the year comes around again and Chief Executive Donald Tsang proudly gets his pat on the head from the Heritage Foundation for running the world’s freest economy. The important thing is that we all smile and pretend this is a different Heritage Foundation from the American hegemonist one that rants about the Beijing Communists’ evil global designs in ways guaranteed to hurt the feelings of the Chinese people.

Part of the annual ritual is a stern reminder from the Foundation that Hong Kong could lose its number-one spot if it doesn’t watch out. In the past the the think-tank has warned that a minimum wage or a competition law might threaten our ideological purity. This year, their spokesman on the radio said on Friday, the danger is Hong Kong’s inclusion in China’s Five Year Plan.

You can see his point. What greater harm could come to a laissez-faire economy than to be subjected to Stalinist-style targets for tractor or wheat production? But that’s not really what it’s about. The Big Lychee is mentioned in the Five Year Plan in order to send us a heavy-handed subliminal message that we are both dependent on and a beneficiary of Beijing’s generosity – which can of course be withdrawn if we don’t shut up and behave.

Still, it is good to see someone call attention to the idiocy of it. Maybe the Heritage Foundation could question some of the things Sir Bow-Tie says on the subject. When Donald says that Hong Kong’s inclusion in the Five Year Plan shows that the city’s role as a financial centre is not threatened by Shanghai, the Foundation could laugh and point out that Shanghai has no free movement of capital, no serious legal, accounting or regulatory systems, no free flow of information, and there are state-owned or –linked corporations as far as you can see, plus corrupt administrators. The only sort of person who could suggest it rivals Hong Kong is either stupid or trying to undermine Hongkongers’ confidence by suggesting otherwise. And what sort of person would do that? Why, the sort of shoe-shiner who knows how to get a pat on the head from Beijing as well.

Comments will be cleared eventually…