Activists show HK government how to do its job, again

As all children who pay attention in their Civics classes know, Hong Kong has four ‘pillar industries’: financial services, trade & logistics, tourism and the other one. What the textbooks do not explain, however, is what ‘pillar industry’ status actually confers. It means that the economic sector concerned is so vital that it is more important than the Hong Kong people themselves.

was the curious case of the Tsimshatsui Star Ferry Bus Terminus.

Officials noted that thousands of Hong Kong people flooded through this transport interchange every day, hopping between bus and ferry as they commuted to and from work. If all these little people could be gathered up and thrown aside out of sight in some way, the planners calculated, there would be more space for the tourists who spend money in shopping centres owned by Wharf Holdings, Cheung Kong and other valuable contributors to the pillar industry in the area.

convenient 17-minute walk away from the ferry pier. Knowing all about the importance of pillar industries, the little people would naturally understand that the interests of the tourism sector came first. The officials effortlessly waved aside the inevitable few who moaned about pregnant women carrying groceries between ferry and bus in the blazing sun and pouring rain. But the complaints continued, joining ill-informed opposition to other far-sighted government policies at the time.

The world’s most gifted civil service, dedicated to serving the community the correct way and nobody else’s – ever – initially dug its heels in and refused to consider changing its plans. Eventually, however, it devised a cunning plan to enable the scheme to

‘move forward’. The bureaucrats arrived at a stunningly clever compromise calculated to irritate as many people as possible by retaining much of the original solution’s inconvenience to commuters, and creating an exceptionally ugly new bus terminus on what could be a pleasant stretch of harbour front.

And this is where we stand today. Except know-it-all activists at Designing Hong Kong now come galloping over the hill with blueprints for a terminus that have that unique not-done-by-HK-government-planners look about them.

The first takes the nasty compromise plan and makes the best of it, with a sensuously curved glass

roof, exotic potted plants, organic scented candles burning at every bus stop and classic Cantonese opera hits on the sound system. The second proposes that Hong Kong bureaucrats submit to the power of the human imagination and place the terminus below ground level, thus freeing up the space above for everyone – local commuters and overseas tourists supporting our landlords’ pillar industry – to enjoy. This costs more, though not as much as certain high-speed rail links and cross-estuary bridges we can think of. (Did I read something about how government land revenues have reached HK$70 billion so far this year?)

The Designing HK website includes a fetching slide show on the subject and an electronic submission form you can send to the Secretary for Transport and Housing before 8 November urging the government to go with a professionally designed, non-HK Civil Service, non-psychopathic option – all ready for you to sign with your email address, plus space for colourful additional comments! 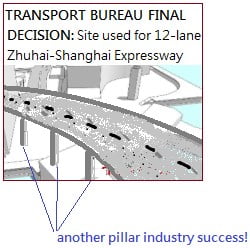 22 Responses to Activists show HK government how to do its job, again