In all fairness, it’s Beijing that put him there

A man who believed he was committing an act of the greatest glory, destined to go down in history for his virtue, instead finds himself condemned to be known forever after, by the few who care, as the Underpants Bomber. (The genteel, easily shocked Victorians of the American media tend to grace him with the slightly less ludicrous ‘Underwear’, but you can still see his fellow convicts smirking on his rare excursions out of solitary.)

In Hong Kong, we have another example of someone who had hopes of making a great impression on our collective memory but will instead fade away in our

minds as yet another incompetent buffoon. By his standards, Chief Executive Donald Tsang’s 2011-12 Policy Address – with the belief-straining title of From Strength to Strength – was pretty gutsy. Where his previous efforts reflected an assumption that nothing was wrong and so nothing needed doing, this one actually has some modest but real ideas, like, um, an international cookery school. But that’s it.

As usual, he scatters cash around in the familiar attempt to soothe the bureaucratic conscience about presiding over an economic structure that forces the poor and middle class to divert much of their income into the pockets of half a dozen property tycoons’ cartels. The elderly, who whine more than most folk who imagine that Hong Kong exists for its residents’ benefit, will get flat-rate HK$2 mass transit fares and cheap dips in the swimming pool.

After several years of denying that property affordability could be a problem, and the priority was something called a ‘healthy’ housing market, the government is giving in and resurrecting a small-scale scheme to sell subsidized homes. It is essentially symbolic, but people keen to time the next big property crash should mark 2016 – when the new apartments come on stream – in their diaries.

Last Saturday, Donald promised that he would roll out unconventional, non-traditional policies. What happened to them? Perhaps there were going to be some, but they got pulled at the last minute. Or maybe he thinks this slightly less-flaccid-than-usual package of measures contains some heady radicalism. In which case, where is it?

One proposal that has set off a bit of mouth-frothing is the plan to let the lucky winners of the Home Ownership Scheme Lottery keep more of any increase in their properties’ value when they eventually sell, rather than pay it back to the government. The idea is to help the buyers trade up to properly overpriced private-sector apartments further down the line. Sounds like one big yawn to me. (Now if he had said he would scrap Land Premiums and introduce an annual land tax…)

Another theoretically far-reaching shift in policy – though nothing to do with land – is the plan to subsidize a handful of electric vehicles for the bus companies to help clean the air. This isn’t unprecedented; the taxpayer shelled out big bucks to convert diesel taxis to LPG years ago. But civil servants break out in hives at any suggestion that ‘their’ vast pile of cash be used to pay companies to clean up. It can’t be beyond the wit of officials to devise a way to subsidize clean buses without putting public cash into private pockets. It’s not as if the money isn’t there. They just like poisonous air; it’s a sign of ‘development’.

Scraping the bottom of the Policy Address barrel, and still no sign of that unconventional, non-traditional policy we were promised. It could just be a mark of Donald’s extreme inflexibility and aversion to imagination that he thinks his last annual address really does contain major departures in governance.

Or maybe it’s the swimming pool thing. Must be. First time since 1842, after all. 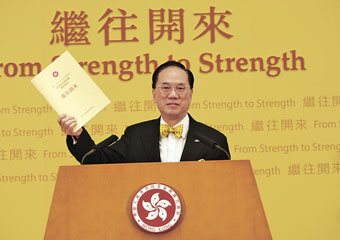 17 Responses to In all fairness, it’s Beijing that put him there