While we’re waiting for something interesting to happen…

Although it is publishing only a ‘holiday edition’ with limited coverage of the Mainland during the National Day period, today’s Hong Kong edition of China Daily offers an embarrassment of anti-Civic Party and anti-Court of First Instance commentary. For an at-a-glance summary, take the editorial cartoon… 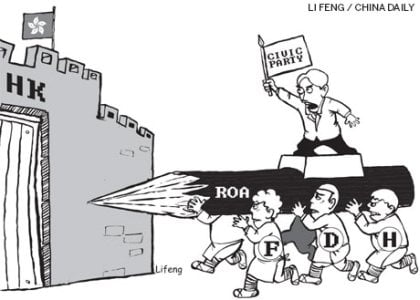 ‘ROA’ here means right of abode; ‘FDH’ means foreign domestic helpers. The battering ram perhaps has a sharp, pencil-like point in order to convey the futility of the maids’ quest for permanent residency, or perhaps because the artist doesn’t know how a battering ram works. (I sympathize with his problem drawing shoes – they’re tricky.) By China Daily standards this is a side-splittingly funny example of the genre.

Anyone in doubt about the party line need look no further than the report on former Secretary for Justice Elsie Leung’s comments about the court’s failure in considering “only the literal meaning of the term ‘ordinary residence’ without referring to the legislative intent of the Basic Law”. Echoing her insistence that the matter be referred to Beijing for interpretation is the mouth-frothing Lau Nai-keung, who bemoans the court’s simplistic pursuit of “common law logic”. For reasons best known to themselves, it seems, the (mostly Mainland) drafters of the Basic Law intended Hong Kong’s constitution to mean something different from or additional to what they put in the text, but you only find out after a court ruling that upsets the government.

At the bottom of the paper’s daily round-up of the Communist Party- and tycoon-controlled press comes a piece from Da Kung Pao on the plot by former Chief Secretary Anson Chan and her Civic Party running dogs to sabotage the Hong Kong government by dismissing former Constitutional Affairs Secretary Stephan Lam’s capabilities as a replacement for Henry Tang as CS. To quote the writer: “…if it’s true as the opposition parties say, that Lam is ‘incompetent’, then they should be happy about it.” Which of course they are. Proof that there are some things we can all agree on.

It is tempting to read something into Chief Executive Donald Tsang’s decision to replace outgoing Executive Council Convenor CY Leung – offering himself as the next CE – with the administration’s omniscient, all-purpose pliable appointee, Ronald Arculli. It could be seen as a slap in the face to CY, as if to say “we have so little regard for you that we’re giving your former title to this old guy who already holds 723 other pointless government positions.” But it’s probably a seniority thing. The Precedence List doesn’t give a clue, though I’m shocked – indeed horrified – that as of 10am this morning the Protocol Office still hadn’t updated the Exco Convenor’s name, even though CY’s resignation took effect yesterday.

They have updated the Exco membership web page, and what a depressing sight it is.

We have here, the non-officials: two (not overly fanatical) pro-Beijing loyalists (one a pro-democrat turncoat); one distinctly non-honourable New Territories godfather; three very tame pro-democrat/independent types; no fewer than five out-and-out shoe-shining, mutually idolizing Friends of Donald, including Ron Arculli; just one former wife of Dickson Poon (a statistical fluke – you would expect more in a random sample of three middle-aged Hong Kong women); and one fund manager best known for eating just one meal a day (that’s V Nee down at the bottom). Can you name them all, boys and girls? There are schools in Hong Kong that require kids to learn them off by heart for Civics class.

And these are the flattering photos… 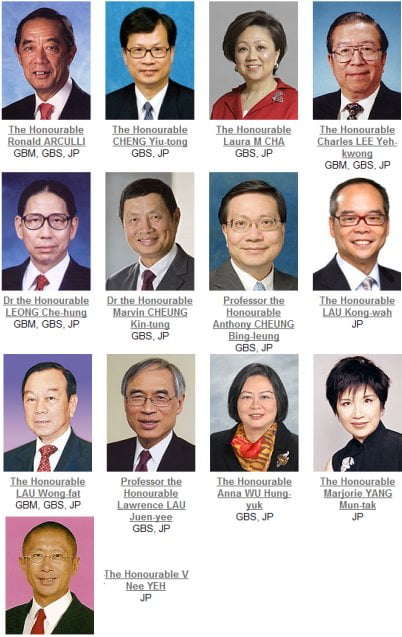