It is hard to see why there is such a fuss – even abroad – over last Friday’s court ruling about overseas domestic helpers and permanent residency in Hong Kong. The court essentially said that the wording of the immigration law on this subject infringed the wording of the Basic Law’s reference to it. But the judge pretty much added that the city, as controller of its own immigration policy, was nonetheless free to grant or refuse permanent residency to those who do not automatically qualify (non-Chinese). Discrimination against one particular group is unconstitutional, but discretion is not.

The Hong Kong government could use the court’s decision as an opportunity to regularize the current Permanent Residency system, establishing clear guidelines not based on condition of servitude or other euphemisms for skin colour. For example, the rules could require applicants of working age to show a minimum monthly HK$20,000 level of income for seven years; that would easily ensure that no Southeast Asian domestic helper would ever qualify, while wholesome white professionals still would. The worst-case scenario is that the Immigration Department would have to print a few more application forms. Instead, the government seems intent on turning an easy-to-solve problem (assuming that cheerful, industrious brown people with permanent residency are a problem) into a threat to civilization.

Part of the reason is that our self-styled leaders, with their rock-bottom opinion poll ratings, can only pander to a bit of populist demagoguery. But even if they had spines, they would find their hands tied in this case.

The anti-maids movement is being stirred up as part of a United Front campaign to smear the Civic Party as wasters of public money (the by-election ‘referendum’ and Zhuhai Bridge legal delay) and manipulators of old women (Zhuhai Bridge) as well as smarmy, elitist, know-it-all, gwailo-loving bananas who want to fill the city with foreign welfare scroungers. This is partly a tactic to reduce the CP’s vote at the November District elections, but it is also a classic United Front move, seizing an opportunity to make the pro-Beijing camp more mainstream and acceptable, and its foes more extreme, in the eyes of the people of Hong Kong. The government has to play along.

With the world watching, we can only hope that our senior policymakers undergo an uncharacteristic outbreak of wisdom and calm. The courts can deliver any judgement they like, but the Immigration Department has all the discretionary powers it needs to stop us from being flooded by all the brown people who, er, live here. 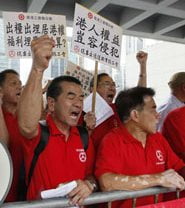 The anti-maid protestors might help the United Front in its Leninist hearts-and-minds project, but they are not a pretty sight in the international media. Not that they don’t have a point, if you leave the racist-tinged welfare scare stories to one side. According to one, maids who speak good English and are skilled in the service sector may take away jobs from low-paid workers. An economist analyzing the local labour market from this comment might indeed conclude that we could stimulate growth by deporting recent Mainland immigrants and replacing them with Filipinos. Everyone, even on the bottom rungs of society, wants someone to look down on, and it’s harder to do if they have Permanent ID Cards. In the early 20th-Century Deep South, blacks were lynched for being literate, so I suppose our local underclass’s dwindling sense of self-worth could be worse.

My own Filipino helper, who has been in Hong Kong for over 30 years, recalls with amusement getting an invitation from the Immigration Department in the mid-to-late 80s to apply for right of abode after her first seven years here. There must be a few out there who, unlike her, sent the form in. The world carried on turning.

On a brighter note, Secretary for Constitutional and Mainland Affairs Stephen Lam is replacing Henry Tang as Chief Secretary. This could just be for an interim period, with a less unpopular, less weasel-like former civil servant taking over when Henry takes over in the middle of next year. The original script seems to have cast the relatively nice and smart Carrie Lam, Secretary for Covering the Place with Concrete, in the role. But Stephen has years to go before retirement, unless a remote distant island beckons in mid-2012 for understandable self-imposed exile. A clueless Henry-simpering Stephen double act would be a joy to behold – so buffoonish that a community on the verge of bursting into tears in despair would end up collapsing in laughter.

17 Responses to Brown people problem set to continue, if possible