On the origins of creeping intolerance

The minute Wong stepped out of the elevator, four men in suits grabbed ahold of him and took him away … dragging Wong 300 meters away from the building [where] he lives. “They didn’t tell me who they were, nor explained the reasons why I had to be taken away. They were grabbing and pulling me. They were bending my wrists, and it felt very painful,” Wong says, showing us his bruises.

It all sounds eerily ‘Mainland’. He was later charged with hooliganism and thrown in a mental ward for trying to complain about local corruption. Except it happened in Lam Tin. Security Secretary Ambrose Lee reacts badly to the report in the scurrilous Next Magazine that he and Chief Secretary Henry Tang met Mainland officials the week before Vice-Premier Li Keqiang’s visit to Hong Kong. The suggestion is that the extraordinary levels of security surrounding Li were ordered by Beijing, including no doubt special advice on how plainclothes cops should snarl while dragging wearers of T-shirts away and digging up dirt on their past criminality (non-payment of a jaywalking fine, apparently).

The idea that Mainland officials guided police behaviour for that three-day period is hugely controversial. The post-1997 arrangement is supposed to hinge on absolute autonomy for Hong Kong in domestic matters. It’s debatable whether the presence of one of the top members of the imperial court is ‘domestic’ or ‘national’, but any conceivable apparent infringement is viewed with alarm as a step down the slippery slope into the abyss of communist totalitarianism. That was why half a million of the middle class split for Canada back in the 80s and 90s.

In some ways, though, it would be reassuring to learn that Mainland officials were in fact behind the over-the-top security on 16-18 August. The alternative explanation is that the local authorities took it upon themselves to clamp down on protestors and residents guilty of willful deportment of T-shirts with malice aforethought. If that were the case, it would be a serious stepping up of the tendency towards growing intolerance that has been emanating from somewhere in the Security Bureau hierarchy in recent years.

This has taken the form of tougher curbs and conditions on protests, pretty obviously designed to make marching physically unpleasant and not worth doing a second time. It has also manifested itself in the shape of social conservatism, with gays forbidden to dance on an anti-homophobia march, and – funnily enough – police raiding a chain of clothes shops in search of subversive T-shirts. In the background, we also had a spate of harsh rulings by the Obscene Articles Tribunal. And there was that attempt to sneak creationism into the high school biology syllabus.

If there is a conspiracy here, it is not creeping Communism but infiltration of the power structure by fundamentalist Christians – of which Ambrose Lee is one (not to mention Secretary for Justice Wong Yan Lung and Secretary for Constitutional Affairs Stephen Lam). While the Chinese Communist Party is, arguably, gradually loosening its grip on society, some Evangelicals seem to be on a global mission to establish a theocracy of their own. If we’re lucky, it was just Beijing borrowing the local cops for a few days. 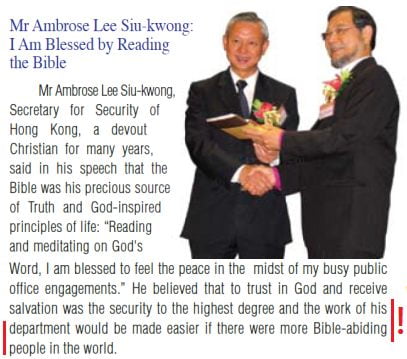 Click to hear ‘The Christian Life’ by the Byrds!

19 Responses to On the origins of creeping intolerance