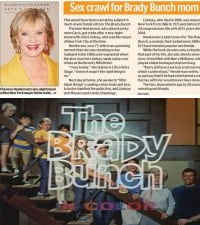 The morning gets off to a bad start as a million breakfasts are surely ruined by the news in the Standard and no doubt elsewhere that the now-77-year-old woman – one Florence Henderson – who played the mother in the wholesome 70s sitcom the Brady Bunch caught crabs from New York City mayor John Lindsay after a one-night stand in the 60s.

Why are they telling us this? Just as memories of the insipid show were finally starting to fade after being etched in our impressionable young minds all those decades ago, along comes this image – ‘Next day at home, she awoke to “little black things” crawling on her body and bed’ – destined to invade our consciousness over and again for years and years far into the latter stages of the first half of the 21st Century.

For relief, we may turn to this week’s Economist, where at the very least we can be sure of finding some excruciatingly bad advertising to brighten up our day. And, behold we find an ad for Martell cognac.

The photo shows a corny shot of nighttime Los Angeles from some fancy Mulholland Drive place with a swimming pool and big draped windows, behind which a sophisticated/ elegant/ elite/ exclusive/ blah-blah party is taking place. In the foreground we see a table and chair bearing a jacket, shades, a bottle of the aforementioned brandy and three trendy modern-style glasses each containing identical and modest measures of the stuff. In other words, the product of a standard, clichéd ad-agency photo shoot.

But wait: the picture has a caption saying ‘Miles Aldridge, inspired by Martell Cordon Bleu’ and features the signature of this same person below. With the phrase ‘never heard of him’ ringing through our mind, we Google it and find that there is indeed such a photographer, apparently specializing in fashion shoots. His website is great for people who like pictures of women wearing very high heels and showing their bottoms.

Few creative types are more pretentious than the photographer. The sight of the featured artiste of the month overseeing the hanging of his works on the walls of the main bar at the Foreign Correspondents Club rivals Florence Henderson’s sexually transmitted mayoral vermin for gag-inducingness. Yes, you went to China with your camera and took pictures of poor labourers who haven’t washed their clothes for ages. Jolly good, well done.

That said, I have known many members of this profession who are more down to earth. The late great Hu Van Es of Vietnam-era fame, for example. And now I think of it, he was sometimes inspired by beverages of various sorts. So let’s not blame Miles Aldridge, who has to eat like the rest of us, for what is coming next.

And that is, of course, the copy…

There I was thinking it was just a plain old photoshopped ad agency snap, when in fact it captures the timeless essence of this brand of booze with its cinematic story-telling sensibility evoking that intriguing and luxurious atmosphere of sophisticated enjoyment. Not shown in the picture are the three people knocking back the liquor, but we can see that the bottle is unopened, suggesting that they have already polished one off – the ripples in the water suggesting that in their sophisticated enjoyment they have loutishly tossed the empty into the pool.

I wonder whether it was Mr Aldridge or the copywriter who needed money more badly.