Singapore’s hopes of becoming a health tourism hub suffer a slight bruising as a surgeon bills a member of Brunei’s royal family US$20 million for treatment that, as it happens, was followed by the patient’s death. (The doctor argues that her practice lost money on the case.)

My recent visit to Bumrungrad Hospital in Bangkok left me in little doubt that when it comes to the international general health-care market, Thailand’s comparative advantage is hard to beat. The hardware costs much the same worldwide, so much of the difference must come down to labour costs; Thai nurses and doctors are paid a fraction of what their Singaporean or Hong Kong counterparts get.

The word ‘hub’ provokes an instant Pavlovian salivary response among Hong Kong government officials, so it goes without saying that they would like to push health tourism here. Of course, if you offer mainlanders discreet delivery of illicit second children and throw in free citizenship for each baby, mothers-to-be will be lining up outside the hospitals. But strip away market distortions, and the Big Lychee’s high salaries and rents surely leave it incapable of competing with the likes of Thailand or India for most medical procedures. (It would probably make sense for the Hong Kong government to outsource some of its public-sector medical work to overseas suppliers like Bumrungrad, though our economically illiterate policymakers would freak out at the idea.)

Hong Kong can get by without exporting heart bypasses. Since its manufacturing base moved, and massively expanded, across the border it has thrived on trade, investment and finance. As well as serving as a vast cut-price manufacturing location, the mainland offers Hong Kong opportunities via all sorts of market distortions that produce a ceaseless appetite for untainted milk powder, stock market listings, money-laundering services and much more.

Singapore, on the other hand, has no such opportunity on its doorstep. Unlike Hong Kong, it sees its poor and corrupt hinterland as a threat. Where the Big Lychee blows billions on absurd bridges and rail links to Shenzhen and Zhuhai, the Lion City spends even more billions on F16s, C130s, Apache attack helicopters, Leopard tanks and a generous handful of frigates and submarines. Where Hong Kong sees a wall of cash bursting to get out, Singapore spies jungles full of resentful, machete-wielding Muslims with a track record of burning down Chinatowns.

Net result: Singapore is insecure and desperate on a level not even the most panic-prone Beijing-appointed Hong Kong leader can imagine. And when you’re desperate you do extreme things, some of which you might later regret. And it doesn’t come much worse than this… 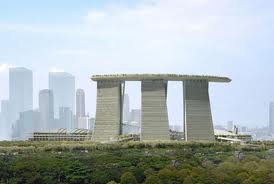 Singapore comes at or near the top of my List of Cities I Haven’t Visited for Years Because I Can’t Be Bothered. Although I was vaguely aware that the place had recently built a casino and some sort of tacky mega-resort complex, I hadn’t realized the full, horrifyingly nauseating lengths officials would allow the architects to go to in an attempt to stand out from Dubai, Shanghai and all the other loser cities out there with their Formula 1 racing and Potemkin financial districts.

That monstrosity in the picture (any resemblance to Stonehenge purely unintentional) is called Marina Bay, and it is apparently all about seamless connectivity and new lifestyle options. I assume the planners were sitting around, watching the three towers rising from the construction site, and one said, “Hey, do you think they would support a massive concrete banana thing balanced along the top?” And his colleague said, “Yeah, you mean something that looks not merely ill-proportioned, unbalanced and misshapen, but just plain vile?” And the third added, “Yeah, with an infinity pool.” And Asia’s ugliest building was born, and Singapore finally became number-one at something. 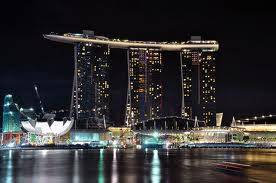