The Boss’s Boss comes to town

I believe the government must put greater effort into caring about ordinary people, especially the underprivileged, and their housing problems. So do many of us. That includes China’s Hong Kong and Macau Affairs boss Wang Guangyu. We can be sure of this because he is 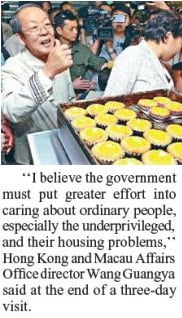 quoted as having said those exact words yesterday before wrapping up his visit to the Big Lychee.

You could tell he was in town on Monday when, if you walked past Exchange Square at around 8.30am you found yourself surrounded by a multitude of beret-sporting, jackbooted, granite-jawed representatives of Asia’s Finest milling around clutching rolls of barrier tape to keep swarms of commuters penned up and well away while the emissary from Beijing dropped in on the Stock Exchange.

However, the arrangements were if anything less onerous than those for Russian President Medvedev’s ride to the airport a few months back, when half of Central had to be shut down while waiting for his lengthy motorcade to pass. Indeed, compared with the grim, scowling menace that often emanated from his predecessors, Wang showed a vaguely friendly face, even posing for an egg tart moment.

Inevitably he spouted lots of that curiously vacuous language Mainland officials use, including those infuriating, bland, almost child-like, statements of the obvious. Addressing the senior tier of civil servants, he intoned…

“To demonstrate a good insight of public opinion, take the pulse of society and grasp the development trends, we must keep learning, have innovative thinking and strive for improvement.”

At which point one of the mischievous Permanent Secretaries, maybe Elizabeth Tse of Commerce and Economic Development, must surely have turned to her neighbour, say Duncan Prescod of Transport and Housing, and whispered, “Well, duh!”

Talk to true believers in the Communist faith, and they will explain that you are supposed to infer specific real meanings from such opaque, empty and plain drivel-like comments. But the catch is that you have to know the meanings first. As with some cryptic crossword clues, you have to guess the possible answer and work backwards and see if it makes sense. Hours of mentally stimulating fun. At other times the comments can, after slight de-coding, be refreshingly straightforward. Wang also told the assembled bureaucrats…

“We not only have to fully understand the basics of the national situation and its long-term development plan, but also gain an objective, comprehensive understanding of the history of our great nation.”

Which simply means absolute, one-party rule under the Communists, today, tomorrow and forever. If you don’t agree it’s because you have an aberrant view of facts and reality.

Wang’s remark about sorting out ordinary people’s housing problems struck more of a chord, perhaps because we know it was – if we have an objective, comprehensive understanding – probably the most futile and redundant utterance of his whole visit. People have been telling Donald Tsang’s administration exactly the same thing for years, and it never makes any difference.

9 Responses to The Boss’s Boss comes to town