I don’t think I can take any more. We’ve got Episode Two of the Kissel milkshake banker-bludgeoning carpet-wrapped expat hysterics drama. We’re exhuming the miniskirts, pigtails, forged wills, radioactive teeth and feng-shui semi-necrophilia of the Nina Wang ‘Daddy Piggy’ billions saga. On top of that, we’ve got Financial Secretary John Tsang inviting the views of various sectors on his forthcoming 2011-12 budget.

And now, as the excitement levels in Hong Kong are getting to the point where it feels like our heads are about to explode, a Macau casino polygamy mega-fortune bequest breakup extravaganza comes along to grip us by the throats. The ailing Stanley Ho hands over virtually all of his stake in his SJM casino/tourism empire equally to his second wife Lucinda 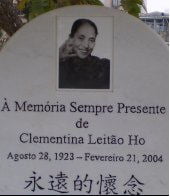 But wait! There’s more! It turns out to be a Macau casino polygamy body-still-breathing vulture fortune plunder scandal, as Dr Stanley Ho’s lawyer issues a statement saying that the 89-year-old ballroom dancing fan’s 99% stake has been hijacked by grasping, scheming family, and he wants it back right now.

And then this morning we awaken to find that this is in fact an ongoing Macau casino polygamy tawdry mega-fortune family-feud misunderstanding massacre. Wife number three, having taken

custody of the still-breathing but slightly confused-looking patriarch, issues a statement that she says is from him dismissing the lawyer and saying the first version of the story was correct and anyone who says otherwise is a liar, so there.

Public relations company Brunswick is appointed to manage this latest version of the truth, and thus this morning’s newspapers carry two letters with what looks like Ho’s signature. In the first, dated 5 January, he denounces (in an impressive and rather credible pissed-off tone) the grab of 99% of his stake by the factions headed by wives numbers two and three, and proclaims a longstanding intention to divide the estate equally among all four current and former partners and offspring. The second, dated 7 January, is to him from daughter Daisy and laboriously recounts an alleged subsequent verbal re-affirmation that the transfer of 99% to wives

two and three was indeed what the old guy really wanted “to preserve harmony.” Dad has signed – a bit shakily? some may ask – a brief endorsement below confirming this.

Echoes of Nina Wang’s forged will. The difference is that Dr the Hon Stanley Ho GBM, GBS is still alive, so in theory it should be possible for someone to chase all the wives, half-siblings and PR slime out of the room, sit him down and ask him to state clearly what he wants to do with his stake in SJM. Mercifully, no such mean-spirited ruination of our entertainment seems likely. We can therefore continue to delight in our visions of a living corpse hooked up to life-support equipment being trundled around between different wives’ palaces and resuscitated from time to time to scrawl his name on the latest document ‘gifting’ the proceeds of seven decades’ sleaze and karma to one or other permutation of teeming dysfunctional descendents.

I want the movie rights.