Not New, not the People’s, not really a Party

For a place where the executive branch of government is unelected and the local leader is barred from membership of any openly organized faction and picked by the heads of a communist one-party state, Hong Kong has an awful lot of political parties.  At least a dozen are represented in the Legislative and District Councils, not counting affiliated labour and other groups, including two launched in just the last couple of months.

One, the Neo-Democrats, are a largely New Territories East-based splinter of the Democratic Party too pure to accept their former colleagues’ rather impressive coup last June in pushing Beijing into making concessions on political reforms for 2012. Given that pluralism is their only ideological common ground, it is perhaps hardly surprising that the Big Lychee’s pan-democracy camp is atomized.

Formations and splits among the pro-establishment groupings are more interesting, as these are mostly under some sort of United Front influence and therefore, in theory, part of Beijing’s sinister grand plan du jour to bring the city under an ever-tighter grip. China’s officials in Hong Kong, schooled in Leninist-style statecraft, have long taken local political parties and their relative states of disunion far more seriously than the city’s own residents. For example, they ordered the HK Progressive Alliance to merge with the Democratic Alliance for the Betterment of HK some six years ago in order to leave the Liberal Party as the main pro-Beijing party representing business and professionals (the HKPA’s roots were more in traditionally patriotic circles, while the Liberals comprised reformed shiners of British shoes).

In practice, owing to a support base restricted to functional constituencies, the Liberals are (or were) essentially a party of vested commercial interests, with a bias towards sectors dominated by conglomerates and inherited wealth.   More than any grouping in the Legislative Council, they acquired a reputation for conspiring against the public interest, fighting consumer rights, cleaner road vehicles, food labeling, the restaurant smoking ban and a minimum wage. These were not principled libertarian positions: their only guiding philosophy was the profitability of (mostly larger) producers of goods and services.

After the Liberals’ disastrous showing in the democratic bits of the 2008 legislative election, an exceptionally scummy handful of them quit to found a new group called Economic Synergy. That left a marginally less reactionary rump to try to differentiate and re-invent the Liberals as the party of amoral grasping plutocrats that has a friendly and electable face. As issues like property scams and rising poverty tarnished the local business elite’s reputation during 2010, and with even Beijing accepting a need for a broader-based political structure, the futility of the project became clearer to some of the more enlightened/ambitious/desperate members, notably Michael Tien.

His departure for ex-Security Secretary Regina Ip’s New People’s Party can be interpreted as Beijing washing its hands of the Liberals. Today’s South China Morning Post quotes Regina at her faction’s official launch yesterday as saying that no Central People’s Government tentacles are pulling any strings. This would be because it isn’t necessary: everyone involved knows their role without being told. 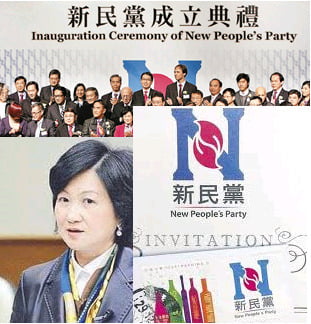 Does the NPP logo bear a resemblance to the fascistic-looking emblem of Singapore’s semi-dictatorial People’s Action Party? Let’s be charitable and say not really. Well, unless you

simply look at the colour scheme. Where the PAP has some sort of Waffen-SS lightning bolt, the NPP has gone for what I think is a blurry and diminutive rendition of the Bauhinia flower, as it appears on the Big Lychee’s flag. I don’t know if the NPP has a slogan (maybe they will get around to a website at some stage), but now I think about it they could do worse than ‘blurry and diminutive’ – and have it with my compliments.

As well as Liberal refugee Michael Tien, the New Regina Party has attracted various moderate pro-establishment figures, such as National People’s Congress delegate and former Education Secretary Fanny Law and Lan Kwai Fong landlord Allan Zeman. To the cadres in the Central People’s Government Liaison Office, these personalities are the cuddly, trendy, funky, hip and groovy face of the pro-Beijing milieu. In a way, they have a point: take a look at the gruesome ogres over at Economic Synergy or consider the venomous old Hong Kong-loathing pro-communist patriots like Tsang Hsin-chi or even Maria Tam. Even so, this supposedly populist line-up – well-heeled and laden with Gold Bauhinia Stars and seats on public bodies – reflects the gap between Beijing and the city’s mainstream community.

Zeman is on record as dismissing universal suffrage for Hong Kong but it was a while ago, and insofar as he embraces the NPP’s embryonic platform he is signing up for something called ‘a quality democratic system’. It would be a global first if they can come up with such a thing. Other than that, the NPP has as much policy gravitas as any Hong Kong political party, which is to say next to none.

One of Regina’s big ideas is the need to diversify our economy. Given the distorting effects of the mighty tourism and concrete-pouring industries, the obvious way to do this is to reduce the privileges and market dominance of developers and mega-landlords though reform of the land system.  Yet Regina prefers technology and ‘innovation’ – which is another way of saying the failed Singapore model in which bureaucrats chuck the public’s money away on trendy-sounding new industries in which we have no competitive advantage and even less talent or flair.

She would like to be Chief Executive, and of course the black-hair dye brigade up in Zhongnanhai (would a word with her stylist reveal her to be a closet member?) are happy to string her along. But to the public she is still tainted, even if unfairly, with the Article 23 disaster, and she will be old and gray (or not) by the time memories of that fade. We can probably relax about her ever actually implementing crazy tech schemes, but don’t expect New thinking on anything else either.

After originally saying the NPP would target the middle class and – yes, really! – civil servants, Regina now says she will generously accept support from the whole wide spectrum of society. (Hey, what have you got to lose, you old broom-headed Machiavellian devil?) This is at least a step forward: the zero-sum Liberal Party never made any secret of the fact that it saw the population as a source of profits and labour to be kept in its place at all costs.

There are two ways of looking at this new party and the inevitable eclipse of the Liberals: either Beijing still doesn’t get it; or Beijing is slowly starting to get it. In the context of last year’s events, it is almost certainly the latter, but there is a noticeable lack of cheering and dancing in the streets.  Progress doesn’t get much more unexciting than this.

7 Responses to Not New, not the People’s, not really a Party